(CNN) -- The International Criminal Tribunal for Rwanda on Thursday convicted the "mastermind" of the Rwandan genocide and sentenced him to life in prison for genocide, crimes against humanity, and war crimes. 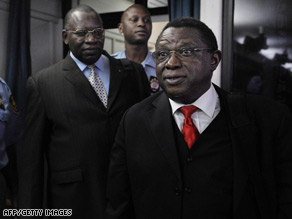 It is the first time the tribunal has convicted high-level officials for the 100-day genocide in 1994 which left an estimated 800,000 people dead.

Theoneste Bagosora, 67, a colonel in the Rwandan army, was found guilty along with two other men -- Major Aloys Ntabakuze and Lieutenant Colonel Anatole Nsengiyumva. All were sentenced to life in prison.

CNN Chief International Correspondent Christiane Amanpour -- who covered the story -- called the verdicts "a real turning point and a milestone in justice."

"It sends a message that right up the chain of command, you cannot hide," Amanpour said.

The court said Bagosora was a key figure in drawing up plans for the genocide. A Hutu, Bagosora was convicted of ordering Hutu militia to slaughter rival Tutsis.

The massacres began after a plane crash on April 6, 1994 that killed the presidents of Rwanda and neighboring Burundi. The court said the plane was brought down by a surface-to-air missile fired from the airport in Kigali, the Rwandan capital.

Watch what happened in the court »

Bagosora decided the military should take over and he refused to involve the prime minister, Agathe Uwilingiyimana, in any discussions, the court found.

April 7, while Bagosora held a crisis meeting with top military officials, the prime minister was arrested, sexually assaulted and killed by top members of the Rwandan Army, the court found.

Find out more about the world's killing fields »

That made Bagosora the head of all political and military affairs in Rwanda, and in that capacity, he was at the top of the chain of command.

The same day the prime minister was killed, the court said, army personnel confined and killed four important opposition leaders -- including the president of the constitutional court and government ministers -- and murdered 10 Belgian peacekeepers who had been dispatched to the prime minister's residence.

The court found Bagosora bore responsibility for those and other killings because he commanded those who carried out the crimes.

"Bagosora was the highest authority in the Ministry of Defense and exercised effective control of the Rwandan army and gendarmerie," said Presiding Judge Erik Mose. "He's therefore responsible for the murder of the prime minister, the four opposition politicians, the 10 Belgian peacekeepers, as well as the extensive military involvement in the killing of civilians during this period."

The killings were carried out by military personnel on the orders of Rwandan authorities including Bagosora, the court said.

The court found that from April to July 1994, Bagosora exercised authority over members of the Rwandan Army and their militiamen, who committed massacres throughout Rwanda with Bagosora's knowledge.

"In all the regions of the country, members of the Tutsi population who were fleeing from the massacres on their hills sought refuge in locations they thought would be safe, often on the recommendation of the local civil and military authorities," the indictment said. "In many of these places, despite the promise that they would be protected by the local civil and military authorities, the refugees were attacked, abducted and massacred, often on the orders or with the complicity of those same authorities."

The indictment against Bagosora alleged he had been opposed to concessions made by his government to Tutsi rebels at 1993 peace talks in Tanzania, and had left the negotiations saying he was returning to Rwanda to "prepare the apocalypse."

During the trial, the court heard 242 witnesses -- 82 for the prosecution and 160 for the defense.

The three convicted men will be held in the tribunal's custody until a state can be found to house them.

The genocide's impact is still be felt today, with recent fighting in neighbouring Congo blamed on lingering tensions from the slaughter.

Rebel leader Laurent Nkunda says his forces are fighting to defend Congolese Tutsis from Hutu militants who escaped to Congo.

All About Rwanda • Genocide • Paul Kagame