(CNN) -- The number of cholera deaths in Zimbabwe has passed 1,000, the United Nations said Wednesday. 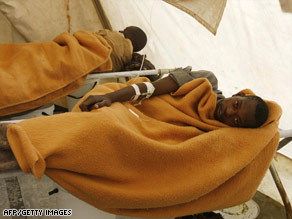 The Office for the Coordination of Humanitarian Affairs said 1,111 people have died in the outbreak and that 20,581 suspected cases have been recorded.

The U.N. figures have been compiled since August.

The worst-hit community is the capital, Harare, with more than 9,700 suspected cases and 328 deaths, according to the office's daily cholera update. The epidemic has spread throughout the country and moved across borders into other nations, such as South Africa, Botswana, and Mozambique.

Zimbabwe has been mired in political turmoil, enduring a severe economic meltdown and coping with an erosion in living conditions.

U.N. Secretary-General Ban Ki-moon earlier this week criticized the country's leadership for its response to the crisis.

"We continue to witness a failure of the leadership in Zimbabwe to address the political, economic, human rights and humanitarian crisis that is confronting the country and to do what is best for the people of Zimbabwe," Ban said.

He said nearly 80 percent of the people don't have access to safe drinking water, and most lack proper sanitary facilities -- conditions that cause the spread of the waterborne disease.

"The current cholera epidemic is only the most visible manifestation of a profound multi-sectoral crisis, encompassing food, agriculture, education, health, water, sanitation and HIV/AIDS," he said.

International humanitarian organizations have been working to help stem the outbreak.

All About Zimbabwe • Cholera • United Nations