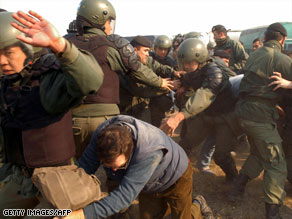 Local reports said there were several injuries and 18 arrests, including Alfredo De Angeli, a farm union leader who has been one of the most outspoken critics of President Cristina Fernandez de Kirchner's export tax.

Military police scuffled with farmers as they tried to remove them from a road that protesters had blocked with their trucks.

Protesters responded by throwing rocks at police and burning large truck tires in the road. Thick clouds of black smoke could be seen for miles.

Scenes of baton-wielding police in riot gear carrying struggling protesters away in trucks were broadcast live around the country.

The clashes took place in the farming community of Gualeguaychu, a stronghold for the protesters, about 124 miles (200 kilometers) north of Buenos Aires.

"It's embarrassing and shameful what this government is doing to us," one protester said. "They need to sit down again with us so we can have dialogue, not violence."

It was the worst day of violence in the 95-day conflict, which started in March over a new 44 percent commodities tax that farmers say unfairly cuts their profits at a time of record gains.

The farming sector is widely credited with helping the country rebound from a devastating economic crisis in 2001.

Farmers have sporadically cut off transportation routes in the country over the past three months in an effort to hit the government's coffers. In those cases, food that normally ships to Europe and Asia has not made it to port, and hundreds of thousands of gallons of spoiled milk have been dumped on rural routes.

Despite the occasional chaos, Argentina's middle class has rallied behind the farmers and voiced their displeasure with the government.

Thousands took to the streets in Buenos Aires on Saturday to bang pots and pans in support of the striking farmers. They also cut off traffic at busy city intersections, waving Argentine flags, singing the national anthem and asking for dialogue between the government and farmers.

Kirchner's popularity has dropped to just 26 percent because of the farming stalemate, which has been the toughest challenge yet to her six-month presidency.

In addition to causing internal conflict, the Argentine farm strike has also driven up global prices for commodities like soy beans, wheat and corn.