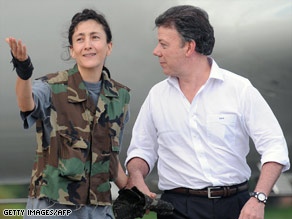 Two of the nine rescuers assumed the roles of journalist and cameraman from the news organization TeleSUR during the daring rescue, Juan Manuel Santos said.

An actual doctor and nurse also took part in the bloodless mission, along with members of the Colombian military who pretended to be an Italian, an Australian, an Arab, a Cuban and a Dominican, he said.

TeleSUR is based in Venezuela and primarily funded by that country's government, but also receives funding from other Latin American countries.

"The supposed journalist had a microphone that said 'TeleSUR,' " Santos said. "I don't know if it was the same one or a different one."

Operation Check snatched 15 hostages from the Revolutionary Armed Forces of Colombia by duping the rebels into believing that they were releasing the hostages to a humanitarian organization that would bring them to another rebel camp.

The actors "were drilled 24 hours per day in their own script" for the operation, Santos said, which freed former presidential candidate Ingrid Betancourt, three American military contractors and 11 Colombian law enforcement members.

"They set up a facade of a false humanitarian organization, and they had to learn their lines," Santos said. "If they were caught or were asked and they did not respond correctly, they were dead."

The move also brought the capture of two rebels.

Jean-Francois Julliard, deputy director of the press advocacy organization Reporters Without Borders, said authorities can endanger journalists when they pose as members of the news media.

"We think it is a dangerous practice because it puts in danger real journalists," he said.

The next time a reporter approaches FARC rebels, he said, the FARC members "will be very suspicious and maybe they will take some physical measures against these journalists because they will think that they are not real journalists."

Initially, the international community hailed the Colombian government for infiltrating the rebel group and carrying out the operation without firing a single weapon or causing bloodshed.

But the government has drawn criticism as details have emerged regarding methods used in the mission.

Previously, Uribe and his top generals had denied that international humanitarian symbols were used in the mission.

The Geneva Conventions prohibit the use of the neutral emblem of the International Committee of the Red Cross by parties to any armed conflict.

Uribe said the man was a member of the Colombian military rescue team who panicked upon seeing the guerrillas as the helicopter was about to land.

"He saw so many guerrillas that he went into a state of angst," Uribe said. "He feared for his life and put on the Red Cross bib over his jacket."

However, the confidential military source who showed CNN the photographs said they were taken moments before the mission took off.

Uribe said he was sorry for the mistake and apologized to Red Cross officials. There will be no official sanction against the man wearing the bib, he indicated.

International legal expert Mark Ellis, executive director of the International Bar Association, said the use of the Red Cross symbol could endanger humanitarian workers and violate the Geneva Conventions.

"The way that the images show the Red Cross emblem being used could be distinguished as a war crime," he said.