Peace Corps temporarily out of Bolivia

WASHINGTON (CNN) -- The Peace Corps temporarily has suspended operations in Bolivia because of "growing instability," the organization said. 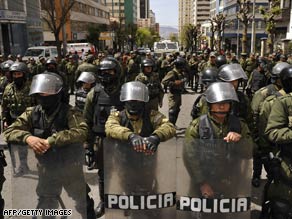 Riot police line up to block the passage of activists Monday in the Bolivian capital of La Paz.

All Peace Corps volunteers who were working there have been moved to Peru, the organization said in a Monday statement, explaining that the volunteers will have the opportunity to close out their service or be transferred to another post.

"Our first priority is the safety and security of our volunteers," Peace Corps Director Ron Tschetter said in the statement.

"Thousands of Peace Corps Volunteers have served in Bolivia since 1962, building deep friendships with the people there. We hope the situation will improve soon so future volunteers can continue the Peace Corps' fine tradition of valuable service to the Bolivian people."

It was not immediately clear how many Peace Corps volunteers were affected.

Evo Morales, Bolivia's first Indian president, is battling an autonomy movement in the natural gas-rich eastern departments of Santa Cruz, Pando, Beni and Tarija. The movement was sparked by Morales' pledge to redistribute wealth from the east to the country's poorer highlands.

Watch clashes and protests in Bolivia »

Members of the 4-month-old Union of South American Countries lent support to Morales on Monday night, voting to create a commission to support the Bolivian government, according to President Michelle Bachelet of Chile.

Watch as South American leaders try to defuse the crisis »

Since the turmoil began some three weeks ago, Morales has thrown out the U.S. ambassador to Bolivia, accusing the American government of inciting the violence. The expelled ambassador, Philip Goldberg, called the charges "false and baseless" and said Bolivia was making a "grave mistake."

Washington has expelled the Bolivian ambassador, Gustavo Guzman, in response.

Despite the escalating diplomatic strife, Goldberg said the United States and Bolivia will continue diplomatic relations.

Venezuelan President Hugo Chavez also has expelled the U.S. ambassador to Venezuela in solidarity with Bolivia, and the United States has followed suit.

Honduran President Manuel Zelaya has announced that he also is suspending the accreditation of the U.S. ambassador to his country in support of Bolivia.