SANTA CRUZ, Bolivia (CNN) -- Both sides in a bitter dispute that has threatened to fracture Bolivia reached a tentative agreement Tuesday intended to resolve the crisis. 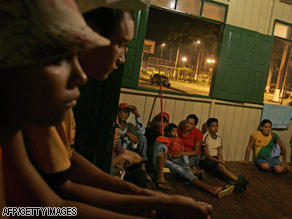 Brazilian workers residing in Bolivia gather Wednesday after fleeing the city of Cobija.

The central government of President Evo Morales, Bolivia's first leader from an Indian majority centered in the western highlands, reached the deal with governors of largely white provinces in the east who have sought more autonomy.

The agreement sets the stage for formal negotiations that are scheduled to begin Thursday.

Both sides agreed to mediation by some representatives of the Catholic Church, European Union, Organization of American States, United Nations and the 12-nation Union of South American Countries. They also agreed to jointly investigate a reported massacre in Pando.

In addition, opposition leaders agreed to vacate government buildings and some energy installations that they have occupied amid violent clashes that killed 30 people last week, according to the document, entitled "A Basis to Institute a Dialogue to Build a Greater National Accord."

Representatives of the central government and opposition signed the document.

The opposition also has been angry over tax money that Morales is diverting from the provinces to fund elderly programs.

Morales has said the opposition leaders are trying to overthrow the government.

"This is a coup in the past few days by the leaders of some provinces, with the takeover of some institutions, the sacking and robbery of some government institutions and attempts to assault the national police and the armed forces," Morales previously said.

Learn more about the Republic of Bolivia »

The announcement of an agreement to end violence came just hours after the military arrested the governor of one of five provinces where violent clashes have occurred in the past three weeks, saying he had committed genocide in the deaths of 30 peasants.

Gov. Leopoldo Fernandez Ferreira of Pando province was picked up at his office in Cobija and placed on a military plane for La Paz, the Bolivian capital. He did not resist.

Groups in Pando and four other Bolivian provinces, backed by the local governors, have demanded greater autonomy and clashed with supporters of the federal government. Federal authorities say the 30 people who were killed Friday were federal supporters.

Morales said the arrest was legal and constitutional.

"This arrest is within the framework of the state where it happened, within the constitutional framework and no one can oppose it," Morales said at a news conference at the presidential palace.

"We will work day and night to avoid any more deaths or terrorist acts," presidential minister Juan Ramon Quintana said in another news conference. "We will do everything we can to arrest those who have committed terrorist acts."

As news of Fernandez's arrest spread across the country, many citizens talked about who else could be on the government's "black list," as they were calling it.

The arrest came hours after Morales returned Monday night from a quick trip to Chile, where presidents of the 12-nation Union of South American Countries met to discuss the Bolivian crisis.

She read a nine-point statement on Chilean TV that calls for the support of human rights and democracy and the preservation of Bolivia's territorial integrity. The statement condemns any attempts to overthrow the government.

It also said the new commission will investigate the peasants' deaths.

UNASUR is modeled on the European Union and aims to politically and economically integrate South American countries.

On Tuesday, the United States announced it is organizing emergency evacuation flights for Americans in Bolivia and urged them to leave if the situation permits. A statement from the U.S. Embassy in La Paz said U.S. citizens need to sign an agreement to pay later for the cost of the flight.

The embassy said some commercial flights are still available, although American Airlines suspended some flights until Sunday.

The United States also continued to urge Americans to delay traveling to Bolivia.

On Monday, the Peace Corps temporarily suspended operations in Bolivia because of "growing instability" there. All Peace Corps volunteers in the country have been moved to Peru.

"Our first priority is the safety and security of our volunteers," Peace Corps Director Ron Tschetter said in a written statement.

Anti-government protesters also have clashed with police and taken over offices and buildings in the five provinces.