(CNN) -- Playboy magazine issued an apology Monday for the cover of its Mexican edition, which features an Argentine model in what many observers say is meant to be a depiction of the Virgin Mary. 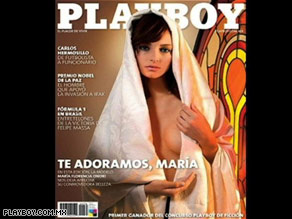 Playboy issued an apology after outrage erupted over this cover of the magazine's Mexican edition.

CNN's Rick Sanchez sat down with CNN Español's Glenda Umana and Father Albert Cutie, a Radio La Paz host, to discuss the reaction among Mexicans and Catholics. The transcript has been edited for clarity.

Rick Sanchez: What is going on in Mexico and how big a deal is this?

Watch the controversy over the Playboy cover »

Glenda Umana: ... there has not been a lot of publicity. It's very interesting, but certainly it has been very, very offensive, not only for the Catholics in Mexico, but all Catholics worldwide. As we can see, this Mexican version of Playboy magazine shows the cover of a model as you were explaining -- María Florencia Onori from Argentina -- posing like the Virgin Mary. This was published last week on the exact date, Rick, when millions of Mexicans celebrate the festival of the Virgin of Guadalupe. Very important, not only for Mexicans but for all Latino-Americans.

Sanchez: So the timing is interesting here. Let me read to the viewers, because we contacted the magazine...

Umana: You have a reaction from them, right?

Sanchez: We do. It's right here. This is from the publisher of the magazine, Raul Sayrols. He says, "The image is not and never was intended to portray the Virgin of Guadalupe," -- which is the Virgin Mary -- "The intent was to portray a renaissance-like mood on the cover." Interesting. Let me bring in somebody for whom this hits home. He's one of the best known priests in the United States. His name is Father Cutie. I worked with him in Miami many times, has his own show -- actually he's got his own book out now. It's called "Real Life, Real Love." Bestseller, by the way. Father, are we as Catholics just too sensitive when it comes to this kind -- after all, it's a beautiful woman being shown to represent what is, in our minds, to all of us, a beautiful woman.

Father Albert Cutie: Listen, there's no doubt that she's a beautiful woman. But a stained-glass window and the veil that looks like that, certainly there's a reference to Mary. Whoever tells you there isn't is simply being hypocritical or not very honest. And that's what I don't like about the statement from Playboy magazine. I think that they timed it not only with the Virgin of Guadalupe, as Glenda was saying, but also with the month of December. How many nativity scenes are out there this time of the year? How many times is Mary a central figure in this whole celebration? And this is offensive. This is very offensive. It's blasphemous.

Sanchez: As a matter of fact, Father --

Sanchez: Father, we got one statement from him. But let me read you the entire statement he had put out earlier in the day, "The image is not and never was intended to portray the Virgin of Guadalupe or any other religious figure." He goes on to say -- "or any other religious figure." Now, on its face, as you look at this picture, that looks like a bald-faced lie, doesn't it?

Cutie: No, and not only that, this is someone who obviously has no scruples. And I'm not talking about the model -- whoever assigned this whole thing. First of all, we don't adore Mary; we adore God, only God. And to say "Te Adoramos María," the Spanish -- "We adore you, Mary" -- basically, it's making a direct religious reference to something which is sacred. Because you don't adore anything if it's not sacred. So to us, really it's a double offense...

Sanchez: And by the way, the emphasis, "Te Adoramos," as you know, being Cuban yourself, that word in Spanish has even more of a heightened religious meaning than it does in English.

Cutie: That's right. It means that you love someone --

Sanchez: Hail -- you hail them.

All About Playboy Enterprises Inc.