(CNN) -- A 23-year-old Mexican beauty queen and seven men were taken into custody late Monday after being found in vehicles containing weapons and cash in central Mexico, police said Tuesday. 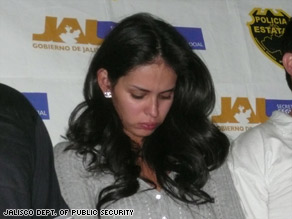 Laura Zuniga and seven men were found in vehicles with guns and $50,000, Mexican police say.

Laura Zuniga and the men were traveling in two vehicles that contained AR-15 assault rifles, handguns, cartridges and $50,000 in cash, said Luis Carlos Najera Gutierrez de Velazco, secretary of public security for the state of Jalisco.

The eight were stopped in Zapopan, outside Guadalajara, and will face arms charges and an investigation by a federal organized crime team, Najera said.

Police, who had received a tip that a group of armed men were in a home, "detected" the vehicles as they were traveling to investigate the call, Najera said.

One of the men in the vehicles was 29-year-old Angel Orlando Garcia Urquiza, who is Zuniga's boyfriend and the brother of "one of the greatest capos of narcotraffic," Najera said.

Najera said Urquiza's brother, Ricardo Garcia Urquiza, is a member of the Juarez cartel and already was in police custody.

All eight were filed before the news media Tuesday. Zuniga, wearing blue jeans and a gray sweater, raised her handcuffed wrists to cover her face in a police picture.

Zuniga is from Culiacan in the state of Sinaloa, a center of drug activity.

In July, she won the title Nuestra Belleza Sinaloa. That gave her the right to compete two months later in the national Nuestra Belleza Mexico in Monterrey, where she won "The Election of the Queens," one of five special recognitions, and came in third overall.

In October, she won the title "Hispanoamerican Queen 2008" in Santa Cruz, Bolivia.

According to the Nuestra Belleza Mexico Web site, she is to represent Mexico in next year's Miss International contest.

All About Crime • Mexico