BANGKOK, Thailand (CNN) -- In Klong Toey, a Bangkok district between a highway and the Chao Phraya River, families of four share motorbikes, street vendors sell residents pouches of food, and doors of homes are open to the outside. A salesman on a bike cart sells broomsticks, while motorcycle taxi drivers, dressed in orange vests, wait at a corner. 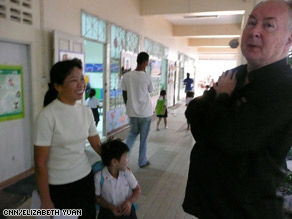 The neighborhood is a lively one, with the smell of food and the sounds of children. It also happens to be poor with a reputation as Bangkok's largest slum.

Port and slaughterhouse workers, day laborers, scavengers, vendors, glue sniffers, prostitutes, karaoke singers, grandmothers and people struggling to get by are among those who bring children to Mercy Centre's preschool in this neighborhood. The school is one of 29 that Father Joe Maier's Human Development Foundation (HDF) has opened to serve Bangkok's poorest children -- about 3,900 today. Another two schools are set to open next week.

The Mercy Centre is also home to street kids and orphans, children affected by HIV or whose parents are mentally ill or too poor to care for them. Mothers with HIV and AIDS also have a home here, and the Mercy Centre's adult hospice is the final shelter for the dying who don't have family or are destitute.

Teenage girls preparing for school and a group of boys gearing up for a morning football match greet Father Joe with fist-pounds, a form of respect that doesn't carry any sexual overtones as hugs might, the blunt Catholic priest explained.

For many, he is considered a father who has tried to keep children from falling through the cracks back onto the streets for the past 35 years.

The 68-year-old has been the priest of what has been known as the "Slaughterhouse" neighborhood, where chickens, cows, and other animals were butchered and gutted for Bangkok's consumption until the 1990s. A smaller version of the slaughterhouse operates there now.

Since 1974, when HDF's first one-baht-a-day school opened in Klong Toey under Father Joe and Sister Maria Chantavarodom's watch, it is estimated more than 35,000 children have graduated from the foundation's schools, gaining an education that would prepare them for government-sponsored primary school.

Today, the school fee has gone up to 10 baht a day (31 U.S. cents), and for the one-fifth of the children whose parents can't afford it, their tuition is subsidized. The same goes for uniforms.

At these pre-schools, children get their first education in Thai, English, Thai history, folklore, dance, song, sports, arts and hygiene from teachers who also are from the slums. Milk, lunch and snacks are provided. A third of the schools are sponsored, as are about 1,000 children from preschool to "wherever education takes them," said John Padorr, adviser to the Mercy Centre.

While primary school -- generally begun at age 7 -- is free, books, uniforms and other fees can prove costly for parents in a community where the highest earners are those making the minimum daily wage of 194 baht ($6), Padorr added. The Klong Toey Women's Group and Savings and Loan, at the Mercy Centre, helps its 400 members not only deal with domestic problems but shore up financial security to pay for their children's schooling.

The effort is a remarkable one in a country where nearly 1 million primary school-aged children are not enrolled in school, and even more fail to complete secondary school, according to the United Nations Children's Fund in Thailand.

Children who fall through the cracks include those who are born without birth registration, who are homeless or live in illegal shelters, and who have HIV/AIDS.

Father Joe and Sister Maria started their first school more than 30 years ago because "kids were not accepted in government schools," he said.

The one-baht-a-day fee was charged to give parents "ownership" of the school so that they would value their children's education, Padorr added. The earlier parents become involved, the less inclined they'd be to pull their children from school to help as workers or caregivers during the secondary school years, Padorr said.

The home for street children followed and, a year later, a health clinic for the poor. Then a housing program was begun to move hundreds of landless families into new homes, and that expanded to rebuild entire neighborhoods lost in fires, a common occurrence here.

As AIDS started hitting neighborhoods, HDF workers began explaining to communities what AIDS was, so that families wouldn't be afraid to send their children to school where youngsters affected by AIDS were also attending. A legal aid center, now in its 11th year, defends street children in legal cases.

Other communities asked Father Joe and Sister Maria to open schools there as well.

The children here look after one another, said Padorr, pointing to Rin, a mentally disabled former street kid who gravitates toward the children most in need of help, like 7-year-old Phon, who's blind.

Father Joe -- an American from Longview, Washington -- came to the neighborhood in 1973 as a missionary priest after a few years working in Laos. "Buddhists and Muslims taught me how to be a Christian," he said. Klong Toey is a sacred place, Father Joe said, with a mosque, a Catholic church and Buddhist temples. "It's home, where we all live," he said.

The children at the Mercy Centre are raised Buddhist and go to temple -- as well as to Mass, Padorr added.

Father Joe wrote about many of the children in his book, "Welcome to the Slaughterhouse," the royalties from which support HDF. A biography about him, "The Gospel of Father Joe," by journalist Greg Barrett, came out in March.

Nitaya Pakkeyaka, a 38-year-old manager of development and fundraising at HDF, used to live next door to Father Joe in the Slaughterhouse. She went to one of the kindergartens, and her sister was one of the first in the neighborhood to be baptized and also was one of Father Joe's students.

Their father drove pigs to the slaughterhouse and people in taxis. He died when Pakkeyaka was very young, and her mother got a day job as a housemaid for one of Father Joe's embassy friends, Pakkeyaka said. At night, the children helped the mother clean the slaughterhouse of pig parts.

It was Father Joe who helped support Pakkeyaka's education through college, she said.

If there were no Father Joe, Pakkeyaka said, "I don't have today. If I don't have him, I don't think I would now have had a good education. I wouldn't have had a chance to speak English. I would have gotten married at 15 instead of 28. Not just me, many people would think."

When she got married, Father Joe gave his house as a wedding present. "Opposite my mother's house," she said.