(CNN) -- Dozens of flights were delayed at India's New Delhi airport Monday after lizards, birds and jackals strayed on to a runway to seek refuge from the monsoon rains. 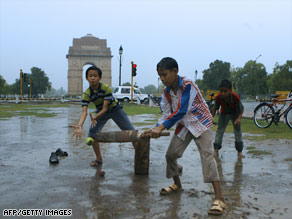 Kids play cricket through a downpour in New Delhi as monsoon rains came early to the area this week.

Animal rescuers rounded up the critters and moved them to habitats outside airport property. But the operation delayed several flights and shut down the runway for some time, airport spokesman Arun Arora said.

Kartick Satyanarayan of the conservation group Wildlife SOS said the animals descended on the runway in search of dry ground.

His group works with the airport to move wildlife from airport property to a sanctuary on the outskirts of the capital.

"It's been raining cats and dogs the last two days. And when it rains like this, water goes in and fills the burrows of these animals," he said.

While monsoon rains typically sweep across the subcontinent in early June, they usually do not reach the capital city of New Delhi and other regions in northern India until early July.

They came about two weeks early in the northern part of the country this year, killing at least 20 people in landslides, home collapses and floods.

The airport sits on more than 2,000 acres that, over the years, have become home to jackals, porcupines, dogs, cats and a variety of birds.

Arora would not say how many flights were delayed during the rescue operation. The airport handles 13,000 domestic and 9,500 international passengers a day.

"(The) numbers are speculative as it is difficult to attribute delays to bad weather, strong winds, birds or animals," Arora said.

In the past, animals on the runway have disrupted flights at the airport -- particularly during the monsoon season, Satyanarayan said.

"The monitor lizards -- they look frightening but they are harmless animals," he said. "But they can grow about three to four feet long. And at the velocity a plane lands, the [lizards] can still cause damage."

All About India • Weather • Wildlife