WASHINGTON (CNN) -- North Korea is to blow up a key part of its controversial Yongbyon nuclear reactor on Friday. 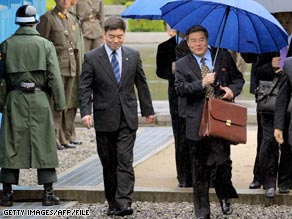 The destruction of the plant's cooling tower is part of an agreement with the United States aimed at denuclearizing the Korean peninsula in exchange for loosening some restrictions on the highly secretive Communist country.

The North Korean government has invited news organizations, including CNN, to witness the event.

Earlier this year, Pyongyang agreed to disable its nuclear reactor and provide a full accounting of its plutonium stockpile, "acknowledge" concerns about its proliferation activities and its uranium enrichment activity, and agree to continue cooperation with a verification process to ensure no further activities are taking place.

North Korea has been taking Yongbyon's main reactor apart, but imploding the cooling tower is an exceptionally important psychological step given that the highly recognizable shape of the structure is synonymous with nuclear power plants.

The United Nations' nuclear watchdog, the International Atomic Energy Agency, says it would take a year to rebuild if North Korea decided to go back on its agreement, and that the construction could not be done in secret.

Speaking at the Heritage Foundation, a conservative Washington think tank, Rice said that "North Korea will soon give its declaration of nuclear programs to China."

China is the host of the six-party talks aimed at ending North Korea's nuclear program, along with Russia, South Korea, Japan and the United States.

Rice spoke in advance of her upcoming trip to Asia where she will be attending a meeting of G8 foreign ministers and meeting with her Asian counterparts.

Rice said once North Korea submits its declaration, President Bush will notify Congress he intends to remove North Korea from the U.S. list of state sponsors of terrorism and scrap some sanctions levied against North Korea because of nuclear concerns.

But she noted that there would be no practical effect to loosening the restrictions because North Korea still was under the same sanctions because of other areas of U.S. law.

Rice said a 45-day review would then begin to see if North Korea is telling the truth and living up to its end of the deal struck in the six-party talks.

"Before those actions go into effect, we would continue to assess the level of North Korean cooperation in helping to verify the accuracy and completeness of its declaration," she said. "And if that cooperation is insufficient, we will respond accordingly."

The United States softened its demand that North Korea publicly admit to having a highly enriched uranium program and to providing Syria with nuclear technology, key unanswered questions that have left negotiations stalled for months.

North Korea has already handed over about 18,000 documents on its nuclear past to the U.S., which the U.S. says are critical to verify North Korea's claims.

Rice said that the deal with North Korea wasn't perfect but offered the U.S. the best chance to learn about North Korea's nuclear history.

"We must keep the broader goal in mind: the elimination of North Korea's nuclear weapons and programs, all of them," she said. "North Korea has said that it is committed to this goal. We'll see."

Rice said that "no final agreement can be concluded" unless the U.S. verifies North Korea's claims.