(CNN) -- "I think that in 20 years chocolate will be like caviar," says John Mason, executive director and founder of the Ghana-based Nature Conservation Research Council (NCRC). 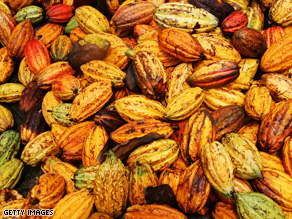 Could you survive a future without chocolate? Communities and the environment are also at stake.

"It will become so rare and so expensive that the average Joe just won't be able to afford it."

The prospect of a future without a ready supply of chocolate is not a pleasant thought for anyone with a sweet tooth, but it's an even more terrifying prospect for producer countries that depend on cocoa beans for a huge portion of their GDP.

Yields are declining all across the cocoa plantations of West Africa, where two thirds of the world's supply is grown, as soils are degraded and the area able to support the crop retreats, according to Mason.

"The way we farm is just not sustainable," he says. "I'm afraid by the time we wake up to that fact it will be too late. I've worked in Ghana for 25 years and I can show you huge areas that can no longer support a crop."

The problem is that cocoa is naturally a rainforest plant that grows in shady conditions surrounded by a high biodiversity, but recently hybrid varieties have been grown on cleared land as mono-cultures and in full sun.

While this will give higher short term yields, the soil quickly becomes degraded and the lifespan of plants can be cut from 75 or 100 years, to 30 or less. When the trees die and the land is exhausted the farmers must move on and clear more rainforest to plant cocoa.

But the looming decline of West African cocoa is not only a problem for farmers and chocolate producers - Cadbury sources 100 percent of the beans they use for UK chocolate production from Ghana - environmentalists are increasingly concerned about the destruction of the rainforest for short-term gain.

Finding strength in a common cause

The forest is not only an important habitat in its own right, but its removal is also affecting the microclimate and changing rainfall patterns, compounding the negative effects of global warning, according to the NCRC.

But a new project seems to show that farmers, environmentalists and multinationals can find strength in their common cause.

"We were coming together at the same point from different directions." In response to these concerns Earthwatch formed "Earthshare" in partnership with Cadbury and the NCRC.

Earthshare is a scientific research project that aims to explore ways of creating sustainable cocoa farming. Currently it works with 60 farms but negotiations are underway to scale up the initiative.

"We want to understand the effect of different farming systems on the environment," says Hillyard.

Intensively farmed landscapes need a lot of inputs -- such as water and chemical fertilizers - and their fertility tends to degrade rapidly.

Whereas a mixed farming landscape, where other flora can shade the cocoa trees and provide habitats for the birds, mammals, reptiles and invertebrates that both eat pests on the cocoa and help pollinate the crop, not only increases biodiversity, it reduces the need for inputs and retains its fertility.

For Cadbury, Earthshare also helps address another problem: the declining number of people wanting to be cocoa farmers.

"It's not just about increasing yields; it's also about decreasing the number of farmers leaving the business.

"They are focused on making it a more attractive crop by improving the livelihoods of cocoa farmers, whether that's by providing better sanitation, improved access to markets to get a better price for their crop, or helping establish new revenue streams, such as eco tourism."

Changing lives at home and abroad

For Earthwatch, engaging with companies provides resources to continue their scientific research and an opportunity to affect corporate behavior.

"I see our involvement with Cadbury as a journey," says Hillyard.

"We have a strong desire to engage with companies who show a commitment to improving their environmental performance.

"This gives us the opportunity to get our research done, and the chance to influence their behavior... If we didn't feel like we were working towards the same goals then it would become difficult for us."

Cadbury employees also benefit from Earthshare through the opportunity to spend time in Ghana.

"It's all about linking staff into their employers Corporate Social Responsibility programs, and helping them understand the way the product they produce impacts on the environment," says Hillyard.

The responses of staff would seem to indicate this was working.

"It was an amazing experience," says Catherine Webber, one of Cadbury laboratory managers in the UK.

"People talk about 'life changing' trips, but it really was. To go somewhere like that and see the way of life of the farmers... it really put my own life in perspective and made me much more environmentally aware and less materialistic."

"It was one of the best business experiences I've had," says David Fleisher, a Cadburys employee in the USA. "That's saying something from almost a 30-year career."

Earthshare is also involving young Ghanaian scientists, engaging them in the work and adding to the skills they have learned at university.

But whether or not schemes such as this can halt the decline of cocoa in West Africa remains to be seen.

"We cannot rely on governments to sort this out," says the NCRC's John Mason.

"Companies must engage with the problem. Good on Cadbury for supporting research that is not always bringing in good news."

But while the scale of the problem is huge, Mason remains positive that if the right steps are taken soon, a permanent collapse of the cocoa crop is avoidable.

"The funny thing is we can reverse this," he says. "It will cost, certainly, but we can do it. The carbon trading market may be one way of making it more affordable, paying farmers for retaining biodiversity as a carbon off-set. We need to make these links.

"Sometimes I feel like a lonely voice, and more people need to engage with these problems, soon. Otherwise, I fear my grandchildren may only ever know the taste of artificial chocolate."