(CNN) -- "You can't leave the ocean to take care of itself," says a surfer interviewed in the remarkable film "Hawaii: Message in the Waves". 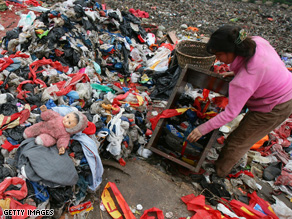 Towns and cities across the world are banning plastic bags to try and reduce waste.

"One of the saddest signs of the times for me is seeing what the dolphins are playing with."

The toys that she is talking about are the detritus of our consumer society; the plastic bags, briefly used, thrown away and now clogging up our oceans.

Across the world more than 13 billion bags are issued every year to shoppers -- that's about 220 per person. On average they are used for 12 minutes before being discarded, but then they remain in the environment for thousands of years.

In Hawaii, due to the action of tides and currents, the bags congregate in the coastal waters, and "Message in the Waves" shows the horrendous consequences of our throwaway culture for the wildlife -- the turtles, sea birds, whales and dolphins tangled up and choking on the trash we throw away.

The world awash with plastic bags

Environment California estimate that plastic bags kill up to one million sea creatures every year, and the British Antarctic Survey have found them floating far north of the Arctic Circle, and as far south as the Falkland Islands.

In June 2006 a United Nations Environmental Program report estimated that there is an average of 46,000 pieces of plastic debris in every square mile of ocean.

There is an area of the Pacific the size of Texas known as the "trash vortex" or "plastic soup" where gyrating currents hold an estimated six kilos of plastic for every kilo of plankton, according to Greenpeace.

In April 2002 a dead minke whale was washed up on the coast of Normandy, France, with nearly a kilogram of plastic bags in her stomach that she had mistaken for food. The plastic also acts as a chemical sponge absorbing some of the worst pollutants in the sea and increasing its toxicity when swallowed.

For "Message in the Waves" filmmaker Rebecca Hosking, seeing the damage the bags cause was a life-changing experience. "What really brought it home for me was one day filming a turtle," she says.

"It had a plastic bag in its mouth and was slowly dying, there was nothing we could do... I turned the camera off and just broke down crying."

She was compelled to take action. Once back home in Modbury, South Devon, Hosking set about ridding her town of the bags, determined that it would no longer contribute to the crisis.

Wherever she went, people immediately committed to changing their ways. Through a campaign of talks and film screenings she persuaded all of the 34 shops in the town to substitute plastic bags with reusable cloth bags.

Across Britain her initiative has struck a chord, and now over 80 other towns have followed her lead and introduced their own schemes to cut down on plastic bags.

A normally conservative British newspaper, The Daily Mail, launched its own Ban the Bag campaign against what it called "the plastic poison", offering readers free reusable bags as well as resources and wall charts for their children's schools. Suddenly, bags were being seen as antisocial.

A survey by London councils revealed that over 90 percent of Londoners wanted a ban, or would support a 30 cents charge on every bag.

But it isn't just people in the UK who are getting involved in the backlash against plastic bags -- all around the globe people power has started to make real change.

Now towns in Canada, Australia, the U.S. and Europe are considering bans or other measures. In Ireland plastic bags have been taxed since 2002, a scheme that is estimated to have cut consumption by 90 percent.

In France, reusable bags now account for half of the market, and San Francisco has become the first U.S. city to adopt a ban on disposable bags. Los Angeles has pledged to phase in a ban by 2012.

But in many ways it is the developing world that has been leading the way.

It was Dhaka, in Bangladesh, that was the first city to ban the bags in 2002 after so many were discarded that they began clogging up drains and causing floods during the Monsoon.

Of course, the Chinese authorities are worried about the effect the 1.6 billion bags discarded each year are having on the environment -- but there is also another worry: oil.

Even where environmental issues fail to convince retailers and legislators, it seems that price may soon persuade them to abandon free plastic bags.

Just as the hike in the price of crude is already making people around the world drive less, it may soon also make it simply unaffordable to give away bags.

Plastic is made from oil and its price rises in tandem. The USA's biggest plastic manufacturer, Dow Chemical, announced price rises of up to 20 per cent in May this year, and many other companies around the world have followed, some complaining that the cost of raw materials has more than doubled.

Much has been made of alternatives to plastic, but bags made from corn starch come with their own environmental issues. Although they are biodegradable, it may take many years for them to fully rot.

They are also often made from GM corn, particularly in the U.S., and there is also the issue of using valuable agricultural land to grow materials to make a product, which is typically only briefly used, at a time of rocketing food prices.

In the end complex solutions may be missing the point. The best solution -- both for the environment and our wallets -- may actually be the simplest: to rely on our rucksacks, cloth bags and reusable plastic carriers to take our purchases home.