KABUL, Afghanistan (CNN) -- Afghan lawmakers have directly accused Pakistan's intelligence agency of involvement in a string of deadly attacks in Afghanistan, blasting their neighbor as "the largest center for breeding and exporting terrorism." 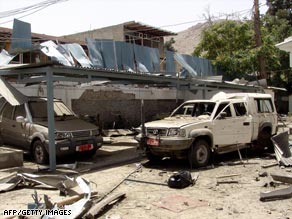 The recent attack by a suicide bomber on the Indian embassy in Kabul killed more than 40 people.

A Pakistani official Tuesday bristled at the accusation, saying that Afghan lawmakers were making allegations without proof.

"We are not an irresponsible nation and we don't blame our failures on others," said a senior official with Pakistan's Directorate for Inter-Services Intelligence (ISI). "If they want to engage in this kind of game, let them be."

The Afghan Cabinet made the scathing indictment in a resolution Monday, saying Afghanistan would boycott a series of meetings with Pakistan unless "bilateral trust" is restored.

In recent weeks a wave of attacks carried out by Islamic militants have killed scores of people in Afghanistan, including an assault on a military outpost Sunday that killed nine U.S. soldiers, as well as a suicide attack on the Indian Embassy a week ago that killed 58 people.

The two incidents, along with an assassination attempt against Afghan President Hamid Karzai at a military ceremony on April 27, are "indicative of the attempts by the ISI (Inter-Services Intelligence) to once again occupy Afghanistan and to perish the true right of the people of Afghanistan for national sovereignty," the resolution said.

Afghanistan regularly accuses Pakistan's intelligence service -- which once had strong ties with the Taliban -- of orchestrating attacks inside its borders.

Pakistan has repeatedly denied involvement, including in the incidents that the resolution cited. U.S. Defense Secretary Robert Gates also said there is no indication that "foreign agents" were responsible for the embassy attack.

The senior ISI official said Tuesday that if Afghanistan has proof that Pakistani intelligence agents were involved in the attacks, that proof should be presented and the ISI will act on it.

The official said that the Pakistani government could also blame incidents in Pakistan, like recent attacks in Karachi and Hangu, on others. But without proof, he said, it would be irresponsible.

Pakistan and Afghanistan have a tumultuous history that dates back several years. During the Soviet occupation of Afghanistan in the 1980s, religious schools in Pakistan helped train fighters who battled the Soviets.

After the Taliban took over Afghanistan in 1996 and imposed fundamentalist rule, Pakistan was one of the few countries that recognized the regime diplomatically.

It dropped its support after the September 11, 2001, terrorist attacks in Washington and New York. But Afghanistan claims that Pakistan continues to informally support the militants, who operate from havens in Pakistan's lawless tribal regions near the porous 1,500-mile border the two countries share.

Adding fresh ammunition to the suspicions, the Rand Corp. -- a U.S. think tank -- released a report last month that said some members of Pakistan's intelligence service and its paramilitary corps were helping insurgents in Afghanistan.

The study, funded by the U.S. Defense Department, alleged that members of the two agencies often tipped off militants to the location and movement of coalition forces trying to rout them. It also said personnel within the agencies trained fighters at camps in Pakistan, financed them and helped them cross the border into Afghanistan.

The Pakistani military denied and denounced the report, calling it a "smear campaign" designed to "create doubts and suspicion in the minds of (the) target audience."

Relations between the two countries are strained to such a point that Karzai has threatened to send troops across the border to take on the militants.

"The people of Afghanistan and the international community have come to the reality that Pakistan intelligence institutions and its army have become the largest center for breeding and exporting terrorism and extremism to the world and particularly to Afghanistan," Monday's resolution said.

All About Afghanistan • The Taliban • Pakistan • Hamid Karzai