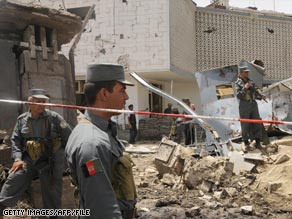 The Indian Embassy in Kabul was badly damaged in the July 7 bombing.

Pakistan strongly denied the allegation Friday, but Afghanistan and India have previously accused Pakistan of involvement in the attack which killed 58 people including an Indian defense attache.

The official told CNN the evidence was not strong enough to draw a firm conclusion but there is a "strong suspicion" the Taliban was behind the attack, and that some unspecified aid came from Pakistan's Directorate of Inter-Services Intelligence, or ISI.

The official would not say how the intelligence was gathered, but he said the evidence was presented to senior Pakistani officials by a top CIA official, Deputy Director Stephen Kappes.

The New York Times, sourcing U.S. government officials, reported Friday that the United States intercepted communications between Pakistani intelligence officers and militants who carried out the attack in Kabul.

"The ISI is a very disciplined organization, manned by military officials. It has played the most crucial role in the war on terror and apprehended members of al Qaeda, the Taliban, and those linked to the attack on mainland America on 9/11," Abbas said.

Abbas said "despite our insistence, no evidence has been provided to us about these allegations."

Earlier this month, Afghan lawmakers directly accused Pakistan's ISI in connection with a string of attacks in Afghanistan. Among these were the Kabul strike and an assassination attempt on Afghan President Hamid Karzai at an April 27 military ceremony.

A senior Afghan government official said the charges were based on phone intercepts of conversations of plotters in Kabul with ISI officers in Pakistan.

A U.S. government official, who would not comment on the specifics of the New York Times story, said, "We've long noted the troubling reports of a relationship between the ISI and the Taliban, and the incident at the Indian Embassy seems to fit the pattern of those reports."

India has previously blamed militants from Pakistan for the July 7 car bombing at the embassy.

"There seems to be a bit of sensationalism in this story," Hasan said. He said the government has regularly denied claims that ISI is involved with militants in Afghanistan and noted that Pakistan has been cooperating in the fight against terrorism.

Gul said the claims are "preposterous" and "totally false," and cautioned that the CIA has been proven to be wrong about intelligence in the past.

The New York Times report also sourced the U.S. officials as saying "there was new information showing that members of the Pakistani intelligence service were increasingly providing militants with details about the American campaign against them, in some cases allowing militants to avoid American missile strikes in Pakistan's tribal areas."

Pakistan and Afghanistan have a tumultuous past. During the Soviet occupation of Afghanistan in the 1980s, religious schools in Pakistan helped train fighters who battled the Soviets.

After the Taliban took over Afghanistan in 1996 and imposed fundamentalist rule, Pakistan was one of the few countries that recognized the regime diplomatically.

It dropped its support after the September 11, 2001, terrorist attacks on Washington and New York.

Pakistan also has a troubled history with India, and in the past India has accused the ISI of supporting militant separatists in Indian-administered Kashmir, which has been the root of two wars between them.

All About Pakistan • Afghanistan • Espionage and Intelligence