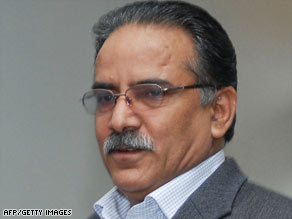 Prachanda is still the supreme commander of the Maoists People's Liberation Army.

Pushpa Kamal Dahal, also known as Prachanda, was elected four months after elections in which his Communist Party of Nepal (Maoist) became the largest party in the 601-member constituent assembly.

Prachanda received 464 votes of the 577 votes cast, while his rival Sher Bahadur Deuba of the Nepali Congress party received 113 votes.

Most of the parties in the assembly voted for the Maoist candidate. A simple majority was enough to be elected the prime minister.

Prachanda's victory became certain on Thursday when the third and fourth biggest parties in Nepal's assembly decided to back him.

He will now lead a coalition government, although talks are ongoing on about the allocation of ministerial portfolios.

The Maoists signed a peace deal with the government in November 2006, joined an interim parliament and government in 2007 and fought multi-party elections in April this year.

The Communist Party of Nepal unexpectedly became the largest party in the elections, winning 220 of the 575 elected seats in the assembly.

The assembly declared Nepal a republic in May and in July elected Nepal's first president, physician Ram Baran Yadav.

Prachanda, 54, entered politics when he was 17 but went underground in 1981, making his first public appearance after 25 years in 2006.

The Maoists launched an insurgency to abolish the monarchy in 1996 and the ten-year conflict claimed more than 13,000 lives.

According to the peace deal agreed in 2008, the estimated 19,602 Maoist combatants would be integrated into the country's security structure, the process of which is yet to be worked out.

Besides completing the peace process, the new government has to face many challenges including inflation, lawlessness, impunity and ethnic aspirations.