(CNN) -- Asashoryu stands at the pinnacle of sumo wrestling like a colossus. 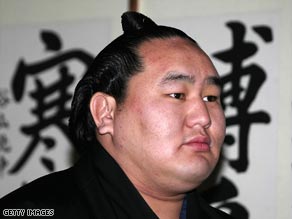 Asashoryu is one of sumo's most successful, and most controversial, wrestlers.

But the 330-lbs Mongolian, sumo's most successful ever grand champion, has not been able to rise above the scandals and tragedies that have beset Japan's national sport in recent years.

Asashoryu, whose real name is Dolgorsuren Dagvadorj, grew up in Mongolia, where both his elder brothers and father were successful wrestlers.

Moving to Japan as a student he was spotted and trained by the Takesago stable and made his professional debut at the age of 18 in 1999.

Winning his first tournament, or basho, in 2002, his rise up the rankings culminated in him attaining the highest position of Grand Champion, or yokozuna, in January 2003, becoming only the 68th yokozuna in the sport's 2,000-year-old history.

Two years later, he set a new record by being the only man to win all six official tournaments in one year.

While Asashoryu's meteoric rise to the top was seen by many as reinvigorating a sport that had seen a decline in homegrown wrestlers and popularity, his success in the dohyo has not pleased everyone.

Some have complained that his wins are too routine, and purists grouse that he does not poses the quality of "hinkaku," the dignity and calm expected in a yokozuna, or give the sport's traditions the necessary respect.

In 2003 he was disqualified from a bout for pulling on the top-knot of an opponent, and has gained a reputation as the enfant-terrible of sumo.

Regardless of the criticisms of Asashoryu's wrestling style, sumo's reputation as a noble sport of tradition has suffered from a number of scandals in recent years and exposed it as just as susceptible to the problems faced by other sports.

With deep links to Japanese culture going back to when sumo was part of the Shinto religious rituals, the sport's troubles have almost represented a national identity crisis.

Following the banning of three non-Japanese wrestlers for using recreational drugs in September, the sport's chairman and former-wrestler Kitanoumi resigned.

It came after a period of years in which a number of match-fixing allegations were made, some directly implicating Asashoryu, and plunging the sport into yet another crisis.

In January 2007 he was accused of bribing other wrestlers to lose bouts, compounding the view that corruption was prevalent in the sport.

Problems for Asashoryu continued in 2007 when he was suspended by the sumo wrestling federation for allegedly faking a doctor's note and was restricted from leaving his house in Tokyo, leading to reports of a nervous breakdown.

Mental as well as physical strength are necessary to reach the top of the sport, but while the punishing physical routine and "hazing" in the training stables has been known and accepted, tragedy struck earlier this year.

Continuing to make his mark in the dohyo will be Asashoryu's continued aim, while sumo hopes it can recover its own poise.

All About Japan Sumo Association