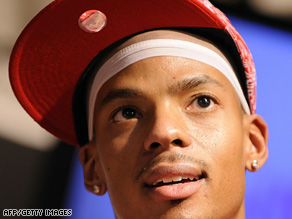 The 27-year-old American has made a name for himself singing enka, a traditional form of lounge music that flourished in 1940's Japan.

It seems an unlikely musical style for the Pittsburgh native to pursue. Enka's fan based comes generally from an older generation and is practically unknown outside of Japan, with simple song themes about love and loss.

But Jero, real name Jerome White, with his youth, hip-hop look and fine singing voice has propelled enka into the 21st century and captured a new audience.

It was the influence of his Japanese grandmother that first led him on the path to enka. She ensured that Jero was aware of his connection to the culture of Japan and sang enka songs in Japanese with him when he was young.

He went on to study Japanese at high school and spent time in Japan while on an exchange with the University of Pittsburgh.

After he graduated he moved to Japan, working as a computer scientist and teaching English. His big break came when he appeared on an amateur singer TV show.

On the back of that success he released his first single in early 2008, promoting it with live appearances in record stores and the odd impromptu street performances.

It shot up the Japanese singles chart, reaching No 4, the highest ever position for a first time enka release.

Watch the show on CNN as we spend time with him in a karaoke spot in Tokyo and find out how he's dealing with sudden fame in a foreign country.