(CNN) -- Anna Tsuchiya is one of Japan's most recognized young stars. 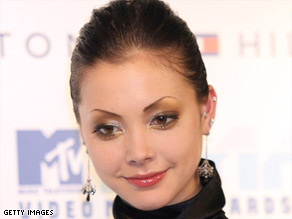 Model, mother, actress and singer: Tsuchiya is living her life her own way.

Born in Tokyo in 1984 to a Japanese mother and an American father, as a teenager, Anna started modeling, gracing the pages of fashion magazines. That later led to an acting career, starring in such movies as "Kamikaze Girls" and "Sakuran."

Taking on non-traditional female roles is something Tsuchiya enjoys, as mush because it fits in with here own self image as a bit of an outsider.

"It's fun to act that kind of character who is said by others to be a 'bad girl' but in fact she has a good heart, and that fits me," she told CNN's Kyung Lah.

"It would be good if many people could establish good relations in their dealings with others by pure and genuine relations rather than what is on the surface. That is the reason I am fond of acting such characters."

More recently, Anna been taking to the stage, as a punk rock singer.

"My music might have an image of being 'hard' but in fact it expresses human emotions. So it is different from the surface image and it expresses deeper messages which have emerged from inside, " she said.

With her twin career as actress and singer, she has become something of a role model for young Japanese, especially as her life and work are far removed from the traditional role for Japanese women.

"There is an image of women by which someone dictates how it should be. Nobody could say 'yes' to that image as the right model. We only get one life. I am a woman but I am doing and want to do things that I feel are cool," she told CNN.

Since becoming a mother three years ago, Tsuchiya has developed a more mature attitude to life: "What has changed very much is that I before I had my baby I lived just for myself. But now the child is more important than myself."

Her more sanguine attitude was compounded by tragedy when her ex-husband died in May 2008.

"Death is a sad thing but it has to happen and time can never be reversed. I happen to think that when I die I don't want to see people around weeping forever. I think he would have felt the same way," she told CNN.

"So if I had been caught up with sorrow he would have been upset. Rather than being overcome, I say I accept the reality."

Despite the setback and tragedies, with Tsuchiya's unique career in the ascendancy, her future looks bright.