TOKYO, Japan (CNN) -- Puzzled zookeepers in northern Japan have discovered the reason why their attempts to mate two polar bears kept failing: Both are female. 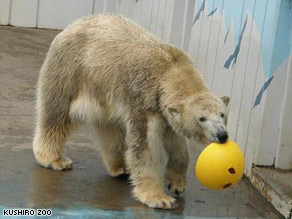 A 4-year-old polar bear sent to impregnate a female polar bear at a zoo in Kushiro was found to be female as well.

The municipal zoo in the city of Kushiro in Hokkaido brought in a polar bear cub three years ago. They named it Tsuyoshi, after the popular baseball outfielder Tsuyoshi Shinjo, and waited until it reached reproductive age.

In June, the zoo introduced Tsuyoshi to its resident bear, an 11-year-old female named Kurumi, and waited for sparks to fly.

But much to the disappointment of zookeepers, Tsuyoshi never made any amorous advances toward Kurumi.

Earlier this month, zookeepers put Tsuyoshi under anesthesia to get to the bottom of the matter. That's when they made their discovery: Tsuyoshi is a female.

Still, the Kushiro zoo plans to keep Tsuyoshi because he -- or rather, she -- has become immensely popular with visitors.

"I have rather mixed feelings, given the need for breeding, but Tsuyoshi is an idol for Kushiro," Yoshio Yamaguchi, head of the Kushiro zoo, told Japan's Kyodo news agency.

Tsuyoshi will even keep her name.

"We will not be changing it to 'Tsuyoko' since it is loved by citizens (by the current name)," Yamaguchi said.

"Ko" is a common suffix for a Japanese female name.

Meanwhile, Tsuyoshi's "brother," who was adopted by another zoo, has also turned out to be female, Kyodo reported.