(CNN) -- Gautam Patel was staying in the Trident Hotel, which is adjacent to the Oberoi Hotel, when the attacks began: 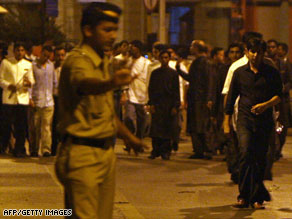 I was up on the 11th floor and while I was on a conference call, I heard two large noises, and they sounded like thuds from within the room, and that's when we realized that there was something serious happening.

We left our room, walked down the fire exit, the hotel staff met us down at the bottom of hotel and put us into large banquet hall where we saw about 150 to 200 people. The lights were out, so we were just told to huddle there until we heard further.

We stayed there for about one hour, that's when we heard another large two bangs. We couldn't tell if they were from outside or within the hotel, then we heard some gunfire. Twenty, 30 minutes past that, one of the senior advisers of the hotel mentioned we would be escorted to the back of the hotel, put into groups of 10 people and told to run to the neighboring cinema hall, where we would be safe.

New York-based filmmaker Smriti Mundhra and her parents were staying in an apartment near the Oberoi, one of the hotels where gunmen took hostages:

We're all safe in our apartment right now, following instructions by the police to stay at home with the doors locked and away from windows.

Just as we were getting ready for bed last night, I heard a little bit of commotion on the street and some police sirens and didn't really think much of it, then my parents came in and told me something was going on in the neighborhood. So we watched the news and realized essentially there's a terrorist attack happening just outside our door.

Watch Mundhra talk about the scene outside her door »

We've been indoors since we've been hearing things from out of the window -- bombs and police sirens and all kinds of chaos. I've been watching in on TV and it's very hard to connect the two, that all of that is happening right outside our doors.

We haven't really been in touch with our neighbors, we've just been locked down in to our apartment.

I've been online and in touch with various friends around Bombay (Mumbai) ... and it seems like we've been getting a lot of information on TV and a lot of updates and it's been a bit confusing, but we have an idea of where things are happening and what's going on, but I think for the most part we're just staying indoors and trying to play it safe until the police and various government agencies have control of the situation.

We were told to stay indoors, not leave our houses, stay away from windows. I know that the people who are in buildings surrounding the Oberoi have been advised to keep lights off and windows and blinds closed and we've done all of that, and just keeping an eye on our family.

Mark Abell is in a hotel room near the Taj:

I came back from dinner last night at 9 with a colleague, came into the lobby. The security fences weren't operating; the hotel shook with an immense blast. Three or four minutes later, there was another large blast, the whole building shaking.

I looked outside to see crowd running. It was chaos, gunshots; it looked all very, very nasty.

My colleague and I are keeping in touch by cell phone because internal communications are dead and we're watching local news. There's lots of conflicting reports. I can see the Taj from my room, and I could see the fire there during the night.

There are couple of receptions for foreign corporations at exact time bomb went off so yes, there's lots of potential targets.