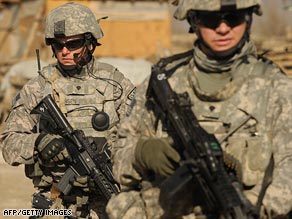 U.S. soldiers patrol near Bagram Air Base in Afghanistan on Wednesday.

U.S. officials describe the proposal as a "community-based" security effort.

The main job of the local units is to be an "early warning system" and be armed mainly for defensive operations, a U.S. military official said.

Participants will get uniforms so they can be readily identified, officials said.

The first phase of the program is expected to begin next year in Wardak province, where the Taliban have overrun many local government institutions.

For the United States, the most sensitive part of the proposal will be the use of American military funds to purchase small arms, most likely AK-47 rifles, that will be given to local Afghans, according to a U.S. military official.

U.S. commanders acknowledge concerns that arming local groups is risky, as it could lead to new armed conflicts between tribes, putting American troops in the middle of unexpected firefights.

The Afghan government will select men for the new security program. It will train them and technically arm them, although the funds will come from the U.S. military.

The Afghans will be responsible for ensuring the loyalty of people in the program, but the United States will oversee the effort and collect biometric information, such as eyeprints and fingerprints, on all participants, according to the U.S. military official.

U.S. officials are emphasizing that because of tribal diversity, the Afghan program differs from the Awakening Councils in Iraq, which include tens of thousands of Sunni gunmen and was credited with helping reduce violence there.