LONDON, England (CNN) -- There could be few more homely or universal scenes than clothes hanging to dry on a washing line. 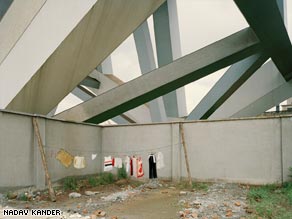 Nadav Kander's "Shanghai I" contrasts change on the Yangtze River with domesticity.

But in this case, the little patch of domesticity is being dwarfed by the huge infrastructure of a bridge, which looks like the leg of a giant robot.

The bridge is part of the recently completed Changxing Island Shipyard at the mouth of the Yangtze River near Shanghai.

It is now the world's biggest shipyard, spreading over eight km of the island's coast. The Chinese hope it will help them overtake South Korea as the world's number one shipbuilder.

The image it is subverting so successfully is "Shanghai I," part of a series of photographs, "Yangtze from East to West" by UK-based photographer Nadav Kander.

In a series of trips during the past two years, Kander has traveled along the 4,100 miles of the Yangtze River, from mouth to source, photographing the landscape and people along the banks of the giant waterway.

Kander says it is an art project -- but the collection of photographs he has taken offer a penetrating vision of contemporary China.

"I am not a documentary picture taker at all," he explains, sitting on a sheepskin-covered sofa in his bright north London studio. "You can't travel around China making pictures that don't become in some way documentary."

From the heavily built-up regions around its 50-mile wide mouth to the miles of trickling rivulets that form its source high in the Tibetan plains, Kander has captured the astounding rate of change happening on the banks of China's main artery, now home to more than 350 million people.

Over the past 30 years, China has maintained an annual growth rate three times the world average. In 2007, it was second only to the U.S. as the world's largest economy.

But this huge nation's unparalleled rate of change has not been without cost, both human and environmental, and it is this that was part of the allure for Kander.

"The attraction is great with a country on the move, a country that would surely yield me the edge," he says. "It felt ill at ease from what I had read and from what I have seen, and subtle disease is what I am attracted to."

Kander is a commercial and editorial photographer of some note, successful enough that his portraits of filmmakers, artists and politicians are used on the cover of magazines like "Rolling Stone." After our interview, he was jetting off to the U.S. to take photographs of U.S. President-elect Barack Obama and family.

His success allows him to take time out for personal projects like his travels in China, described by one critic from The Financial Times as "a compelling demonstration of photography put to its maximum use."

The first thing that strikes you about the images is the incredible scale of the structures they contain, including a series of enormous half-built bridges, shipping docks, billboards, skyscrapers and the Three Gorges Dam.

The next thing is how tiny the people, and the evidence of their activity, looks against these behemoths.

The atmosphere in Kander's photographs has a soupy, almost physical presence. It looks like the air is a bit sulfurous. Was this a result of pollution from the coal mines China derives 70 percent of its energy from?

"[The air] was thick," Kander says. "I do print my pictures so the air has a presence, so it suited me that most of the river is like that ... there are huge steel refineries with coal which could be why it is like that."

Kander was also deeply touched by the human dimension of China's transformation.

He explains that in China, the scale of development has left many cities, towns and villages unrecognizable. The knock-on effect for some Chinese is that they are unable to revisit the places where they grew up because they no longer exist.

One such place is the area around the Three Gorges Dam, the construction of of which has caused millions of people to be relocated (although part of the thinking behind the project is to stop the Yangtze from flooding). Kander took photographs in Sichuan of the area around Old Fengdu.

The city, which dates back to the Zhou Dynasty almost 2,300 years ago, was flooded by the 400-mile long reservoir created by the dam. Kander's pictures of the deserted city days before being covered by the water are haunting.

He also photographed New Fengdu, the ambitious replacement city built on the opposite bank of the river in a handful of years since the inception of the dam project.

It is hard to avoid seeing a political dimension to these images and, to a degree, Kander's statements -- something he denies.

Ultimately, whatever you take away from Kander's arresting collection of photographs, he has captured a fascinating moment in the transformation of this ancient culture.

"They are just pictures," he says, "and pictures that can't be taken again."