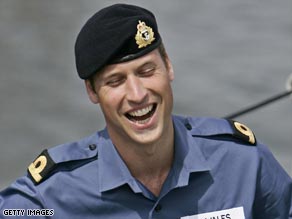 Prince William has helped bust a speed boat smuggling $80 million worth of cocaine.

William, who is serving in the Royal Navy, helped make the bust last weekend when he spotted a speedboat found to be carrying nearly a ton of cocaine in the Atlantic Ocean, Britain's Ministry of Defense said Wednesday.

William, 26, was one of the crew members aboard a helicopter attached to the frigate HMS Iron Duke who spotted the ocean-going speedboat hundreds of miles northeast of Barbados, the defense ministry said

The 50-foot-long power boat raised suspicions because it was a small vessel far out to sea and resembled a "go-fast" boat commonly used for drug smuggling, the ministry said. The boat's location suggested it was en route to Europe or North Africa, it said.

The chopper's crew informed the ship's captain about the boat, and U.S. Coast Guard personnel who were on the frigate then boarded the boat. They found 45 bales of cocaine weighing a total of 900 kilograms (just under a ton), the defense ministry said.

The cocaine has a minimum street value of $80 million, the ministry said.

The bust went smoothly with no violence, defense officials said. Navy crew detained the five men on the boat, which was in poor condition and later sank.

William is in the middle of a two-month attachment with the Royal Navy as part of his continued experience with various branches of the military. The prince, who is called sub lieutenant Wales in the navy, is also expected to spend time aboard a mine hunter and submarine during his attachment, which ends August 1.

William's vessel, the Iron Duke, is a patrol boat which supports overseas British territories in the event of a hurricane and carries out counter-narcotic operations.

William completed a four-month attachment with the Royal Air Force earlier this year and received his pilot's wings on graduation in April. He learned to fly three different aircraft during the attachment and is known as Flying Officer Wales within the RAF.

William is already a second lieutenant in the British Army, where he serves in the Blues and Royals regiment of the Household Cavalry.

The attachments are designed to give the prince, who as king will be the head of the armed forces, experience with the military.