Beheaded Hitler waxwork will be restored

BERLIN, Germany (CNN) -- Madame Tussauds says it will repair the wax figure of Adolf Hitler beheaded by a visitor over the weekend and return it to its Berlin exhibition space as soon as possible. 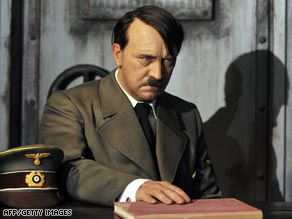 German police said that a 41-year-old man entered the exhibit shortly after the museum doors opened Saturday and "made for the Hitler figure," scuffling with a guard and the manager before tearing the head off the life-size statue.

A police spokesman confirmed to CNN that the man was a former policeman, having spent three years in police training between 1984 and 1987. He did not finish that police training, for personal reasons.

The man was released from police custody late afternoon on Saturday.

Despite the incident, Madame Tussauds officials said they will show the waxwork of Adolf Hitler in the exhibition again.

In a statement the Museum said: "Madame Tussauds is non-political and makes no comment or value-judgement either on the persons who are exhibited in the Museum or on what they have done during their lifetime.

"Figures are chosen for their popularity or for their influence on the path of history -- for better or for worse. Adolf Hitler stands for a decisive part of Berlin's history, which cannot be denied."

Saturday was the opening day of the Berlin branch of the famous Madame Tussauds wax museum.

The presence of the waxwork, which depicted the Nazi dictator sitting at his desk in his bunker shortly before he committed suicide in 1945, in the new museum led to criticism in German media over recent weeks. But the museum's defenders argued Hitler's role in German history must not be ignored.

Hitler was shown with a sullen expression, his head slightly down, and one hand on the desk.

All About Berlin • Adolf Hitler