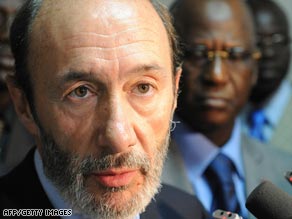 Also arrested were eight other suspects who allegedly worked secretly for ETA while maintaining the appearance of normal lives, Rubalcaba said at a nationally-televised news conference in Madrid.

ETA is blamed for more than 800 deaths in its long fight for Basque independence from Spain and is listed as a terrorist group by the European Union and the United States.

The group arrested Tuesday is thought to be the most active cell since ETA officially ended its unilateral cease-fire last year, Rubalcaba said.

"We can't guarantee it's the only active ETA cell. But it was the most active, and the most wanted by police, since the cease-fire," Rubalcaba said.

On May 14, a car bomb explosion at a Civil Guard barracks in Alava province killed a paramilitary Civil Guard -- the most recent ETA fatality -- and wounded four others.

Other arrests occurred near Bilbao, but also hundreds of miles to the west, in Pontevedra, in the Galicia region, and far to Spain's south, in Malaga, in the Andalusia region, Rubalcaba said. He added there was no immediate evidence to suggest ETA had established bases in those regions, but it was under investigation.

Suspected cell leader Goikoetxea has been on the run for five years, Spanish media reports said.

Rubalcaba said authorities link Goikoetxea to attacks against three Civil Guard barracks, including the one in May, and an attack against a Basque regional police station.

Yet ETA did not officially end its cease-fire until June 2007. Authorities suspect that the cell arrested Tuesday was behind many of the attacks since then.