(CNN) -- Georgian leaders may be blaming Russia for the conflict raging in South Ossetia, but former Soviet President Mikhail Gorbachev said Thursday "there is no doubt" that Georgia provoked the clash. 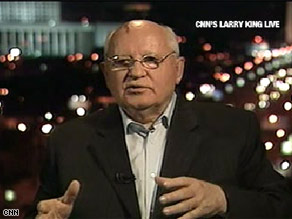 "This was the use of sophisticated weapons against a small town, against a sleeping people. This was a barbaric assault," said Gorbachev, the last president of the former Soviet Union.

But Georgian President Mikheil Saakashvili, who also appeared on CNN's "Larry King Live" Thursday, said he was "profoundly shocked" that Mikhail Gorbachev would use a television appearance "for basically vindicating lies and deceptions."

Last week, Georgia said it launched an operation into South Ossetia after a cease-fire was broken with artillery fire from Russian separatists that killed 10 people including civilians and peacekeepers. It accused Russia, which also has peacekeepers in the region, of backing the separatists.

Hours later, the Russian news agency Interfax reported that Russian authorities said 10 Russian peacekeepers had been killed and 30 wounded in an attack by Georgians.

"Western television didn't show what happened in Tskhinvali," Gorbachev said. "Only now they're beginning to show some pictures of the destruction. So this looks to me like it was a well-prepared project. And with any outcome, they wanted to put the blame on Russia."

He called Georgia's claims that Russia is attempting to dismantle its democracy "all lies from beginning to end."

In response, Saakashvili expressed disappointment with the sentiments from Gorbachev, who he said he once respected.

"This is the man, Mr. Gorbachev, who helped to, you know, bring down KGB kingdom. And he is the one who is, you know, justifying what the KGB people are doing right now in my country," Saakashvili said.

"Shame on him. Shame on you, Mr. Gorbachev, for perpetuating the very regime you helped to defeat and you fought against as the head of the Soviet Union."

Gorbachev also said the United States is jeopardizing its fragile relationship with Russia by backing Georgia.

All About Russia • Mikhail Gorbachev • Georgia