Six of the best: CNN readers tell us their stories 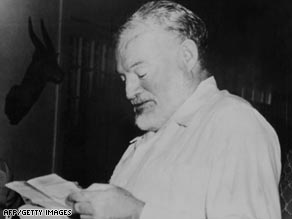 When the typewriter started to be mass-produced in the late nineteenth century, for example, many authors avoided it preferring to still pen their work by hand. The same was true of the introduction of computers and, in more recent years, the development of the Internet.

Some writers view the online revolution much more favorably. Author of the worldwide bestseller "The Alchemist," Brazilian Paolo Coelho believes the boundless possibility for communication offered by the Web makes it a great medium for storytelling.

"Today everybody can tell a story. That is magical because everybody can express themselves," says Coelho, who keeps in touch with his global audience via his own successful blog.

One area of storytelling where this democratization of communication offered by the Internet has made positive in-roads is in the world of "flash fiction."

"Flash fiction" or "short short stories" or "microfiction" goes by a number of names and definitions. Usually referring to stories of less than 1,000 words in length, this type of highly condensed writing has roots going back as far as "Aesop's Fables."

The fact these bite-size stories can be enjoyed in a five-minute coffee break at work means they fit neatly into fast-paced lifestyles of many in the modern world. Consequently there has been a proliferation of "flash fiction" on the Web, with E-zines and dedicated sites like Flash Fiction Online showcasing the talents of writers like Bruce Holland Rogers.

Not wanting to miss out on this online phenomenon and eager to showcase some new talent, CNN's Spirit of asked readers to come up with their own examples of the form based on a "flash fiction" classic from Ernest Hemingway.

The American writer once won a bet that he could write a story in just six words, and we asked our readers to do the same. Over 30 of you took up the challenge with some very impressive results.

A straw poll of the Spirit of office found many admiring comments for this dramatic scenario dreamt up by K.B: "One list, seven names, six bullets."

We also liked Douglas Green's story, with its heavy whiff of adultery: "Sweating guilt, he closed the door."

The prize for creating the most intrigue goes to Megan who left us scratching our heads in puzzlement at this unusual epitaph: "E.J. Ross. Born 1979. Died 1942." We also loved Clem's eccentric inversion of the typical love story: "Boy meets girl, girl eats boy."

Finally, for all those fighting with writer's block Dan L. offered these words of wisdom: "Shakespeare had bad days too, right?"

Here's the list in full, many thanks to all those who took part:

He withdrew, she gasped, he left. (Chris Luff)

Do not disturb, writing in progress. (James)

Accepting the Oscar, she thanked me. (Justin)

Why can't you ask why? (Danryan)

Your oil is mine. (Pedro Faria Lopes)