MADRID, Spain (CNN) -- A Spanair MD-82 airliner was not on fire as it took off from Madrid's airport but lifted off slightly into the air, fell back to the ground and caught fire only after skidding off the side of the runway, a source familiar said Friday. 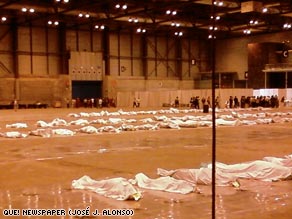 The plane crash victims' bodies laid out at a makeshift morgue in Madrid.

A total of 153 people were killed.

Initially, there were indications that an engine might have caught fire as the plane was taking off, but the source said airport video shows the plane lifting off, veering sharply right and then dragging or skidding down the right side of the runway. There was a cloud of dust, the source said, followed by a fireball.

Canary Islands regional President Paulino Rivero said after meeting with Spain's prime minister, Jose Luis Rodriguez Zapatero, that the latter had seen the video and described it as showing the plane using up all the runway as it tried to take off but then never reaching adequate altitude, The Associated Press reported.

Eighty of the bodies recovered from the wreckage of Wednesday's fiery plane crash have been identified, Spanish authorities said Friday.

Watch as Spain deals with tragedy »

Many of the bodies are so badly burned that fingerprint identification is impossible, and investigators will have to rely on DNA, officials said.

The plane was all but destroyed in the crash, a rescue worker said.

When emergency crews arrived on the scene, "you couldn't distinguish that there was an aircraft there, apart from the remains of the tail," Ergivio Corral said. "If you didn't know it, you wouldn't have been able to say there was a plane."

Authorities have handed over the remains of 35 victims to their families, officials said.

Families of the victims are being housed in a hotel near the airport, and the government planned to brief them on the crash investigation Friday.

The cause of the accident is still unknown, but Spanair spokesman Javier Mendoza said flight data recorders had been recovered. iReport.com: Share your photos, videos from the scene

"One of them seems to be... a little bit damaged, but [investigators] are confident they could use the information," Mendoza said. "But we have to wait for the downloading and the analysis" before any conclusions can be drawn, he said.

Witnesses reported that the plane banked violently to the right as it attempted to take off before slamming back to the ground and coming to a rest in a gully just off the runway at Madrid's Bajaras airport.

Watch as the wounded arrive at a hospital »

The plane's departure had been delayed for nearly two hours due to a technical problem with the aircraft, Mendoza said, but it was not clear whether that fault was related to the crash.

"The heating problem was treated and corrected by Spanair maintenance personnel," he said.

"We have reviewed the details on this faulty situation with the inspectors of our civil aviation authority," he said, "and we all come to the conclusion that was nothing abnormal in this resolution of that problem."

Madrid observed five minutes of silence Thursday to honor the victims, and the country began three days of mourning.

See a map of the airport »

Spanair, a low-cost airline that has a flight-sharing agreement with Lufthansa, is owned by SAS Scandinavian Airlines.

Twenty-two of the passengers were children, two of them infants, Spanair said. After contacting families, the airline published the names of those aboard on its Web site.

It was the first fatal accident at the airport since December 1983, when 93 people were killed as two Spanish airliners collided while taxiing for takeoff. The airport, which sits eight miles (13 km) northeast of central Madrid, is Spain's busiest, handling more than 40 million passengers a year.