Analysis: Is Ukraine the next domino? 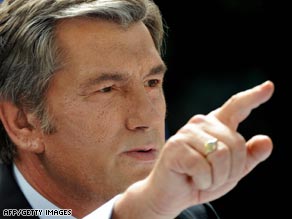 Ukraine's President Viktor Yuschenko has made it clear that he would welcome closer ties with the West.

They want to shore up the Western-leaning President Viktor Yuschenko, amid fears that his country could become the next frontline in the power struggle between Russia and the West. It is in part a deliberate signal to an emboldened Moscow not to overreach. But EU nations will only be taking their support so far, for geographical, practical and political reasons.

Conflict between Russia and Georgia, a tiny country of around 5 million citizens, was one thing. Conflict with the 47 million strong Ukraine would be a different matter, with much wider ramifications. What do you think of Russia's relationship with the West?

While Georgia's President Mikhail Saakashvili, at least for the moment, seems to have the bulk of the Georgian population behind him, Ukraine is much more divided about relations with Moscow. There is a huge energy dependency. Around 17 percent of Ukraine citizens, according to the census, are ethnic Russians. Even the country's political leadership is divided.

Although they were allies in Ukraine's 2004 Orange Revolution and both would like to see Ukraine in the EU, Prime Minister Yulia Tymoshenko has distanced herself from Yuschenko's eagerness to enter the embrace of NATO. She has also criticized his presidential decree restricting the movements of Russia's Ukraine-based Black Sea fleet, based in Ukraine's Crimean peninsula, where there is a heavy concentration of ethnic Russians.

Yuschenko flew to Tblisi to stand shoulder-to-shoulder with Saakashvili over the conflict in Georgia, while Tymoshenko focused on calls for a cessation of hostilities.

Miliband used his visit to Kiev to insist that Russia's re-drawing of the map in the Caucusus was a moment of truth for Europe, marking the end of a post-Cold War period of geopolitical calm. But significantly Miliband also urged Ukraine to avoid giving Russia a pretext to intervene in the Crimea, where Kiev accuses Russia of trying to stir up trouble -- just as Saakashvili had accused Moscow of doing in South Ossetia before launching his military assault.

The Ukranian port of Sebastopol is leased to the Russian Black Sea fleet until 2017 and Yuschenko has urged that Russia should be asked for a higher rent and be subject to more restrictions. Miliband may be making the toughest warning noises he dares to Russia, but he also urged that "the Ukrainian government should ensure that the letter of the agreements are stuck to until 2017."

In recent years Ukraine has sought an uneasy balance between courting the West and not too overtly angering Moscow. But lately Yuschenko has grown bolder, offering to co-operate in the U.S. missile defense shield in Europe, despite the chilling threats from Moscow to Poland over its planned participation. NATO and EU leaders would not want him to get much bolder than that.

While a majority of Ukrainians, according to opinion polls, would like to see their country in the EU, they are sharply divided about joining NATO. Only last April EU Commission President Jose Manuel Barroso complained about the country's lack of political stability (a key qualification for membership). Disputes between president and prime minister over relations with Russia, he suggested, were holding up progress.

There is a regular EU/Ukraine meeting next month and Kiev will be looking for strong signals that it will meet a favorable response over its membership aims. Miliband declared in Kiev: "My visit is designed to send a simple message: we have not forgotten our commitments to you."

Ukraine allies like Poland will be pushing for those words to be reinforced with action, but EU commitments tend to come with rather vague timetables, and to become entangled in wider issues.

Poland's prospects of speeding its membership prospects will depend on who wins the internal EU argument between those who, with an eye to their energy supplies, want to see the conflict with Russia cool down and those who want to send a strong signal to Russian Prime Minister Vladimir Putin and President Dmitry Medvedev, in that order, that they have already gone too far.