No survivors as Russian jetliner crashes

MOSCOW, Russia (CNN) -- A passenger jet caught fire early Sunday, exploded and crashed into railway tracks in the central Russian city of Perm, killing all 88 people on board. 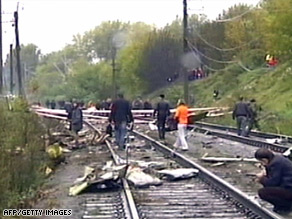 Wreckage from the Aeroflot-Nord Boeing 737, which crashed near Perm, lies across a railway track.

The exact cause of the pre-dawn crash is under investigation, but government spokesman Vladimir Markin said "a technical breakdown" was a likely cause.

Markin said in televised remarks that the failure of one of the Boeing 737-500's two engines may have caused the plane to come down, The Associated Press reported.

Airline officials have said there is no indication of terrorism.

"We think it's very doubtful that it was the result of a terrorist attack, because at the scene, there were no traces of explosives as we know for now," said Lev Koshlyakov, Deputy Director General of Aeroflot.

It took firefighters more than two hours to extinguish the blazing wreckage. When the sun rose, pieces of the Aeroflot jet were strewn about the railroad tracks.

"It slammed in front of my house, and there was a huge flame," an unidentified woman in Perm told Russian state television. "It looked like fireworks."

She said the impact of the crash "threw me across my sheets.... Then my daughter ran in from the next room and asked if a war had started."

She and other witnesses said they saw the aircraft burning before it came crashing down.

The jet was en route to Perm from Moscow when the pilots lost communication with air traffic control just before landing about 3:10 a.m. (2110 GMT), an Aeroflot official said. He described the weather at the time as "mediocre."

The public safety minister for the Perm region said investigators were combing a 2.5-mile (4-kilometer) area, including homes and railways.

Watch more about the crash »

"Right now, it's apparent that there was a fire on the plane at one kilometer in the air," Yuri Orlov said. "After that, all contact was cut off -- the plane exploded."

The flight data recorder has been recovered and will be analyzed by the International Aviation Commission, Russian Transport Minister Igor Levitin said.

The plane carried 82 passengers, including seven children, and a crew of six. At least 21 non-Russians were on board, including passport-holders from Azerbaijan, Germany, France, Italy, Switzerland and Ukraine, said Lev Koshlyakov, Aeroflot's deputy director general.

The U.S. Embassy confirmed that no Americans were on board the flight, even though one passenger was listed as a U.S. citizen.

It is the second crash in the region involving a Boeing 737 in less than a month. An Iran-bound Boeing 737 with 90 people on board crashed on August 24 just outside the airport in Kyrgyzstan's capital, Bishkek, killing 68.

The 737 is a workhorse of the airline industry, with thousands of planes in service. Aeroflot said the one that crashed in Perm was manufactured in 1992 and was operated by its Aeroflot-Nord subsidiary.

"This Boeing 737 has all the necessary certificates," Koshlyakov said. "We conduct audits and inspections of all the affiliate companies we work with in the realm of their effectiveness, safety and reliability of the airplanes."

Airline safety in Russia and the former Soviet Union is among the worst in the world. Aviation experts say poor maintenance, inadequate pilot training and weak government controls are major factors.

But Aeroflot is considered one of the safer airlines in the region. Sunday's crash is the first fatal accident for the airline since 1994, when a Russian pilot handed control of an Airbus to his 15-year-old son. It crashed, killing all 75 people on board.

Russia's government has now ordered an inquiry into the latest incident, to find out how another routine flight could have ended in tragedy.

The National Transportation Safety Board will send a team of investigators to Perm to look into the incident -- a standard practice when a U.S.-made aircraft crashes.

CNN's Kathleen Koch and Michael Sefanov contributed to this report