LONDON, England (CNN) -- You can almost picture it now: Paris Hilton swallowed up by a tight-fitting futuristic designer space suit -- one hand waving at the on-flight camera, the other clasping a Dior "space traveler" handbag. 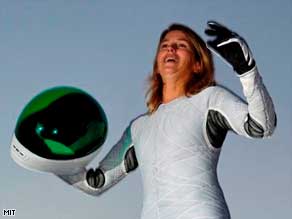 Oh yes, with the age of space tourism upon us, space fashion looks set to become the next step into this infinite world of adventure.

One factor certain to drive the fashion-crazy towards space concepts is the super-wealthy space tourists (reportedly paying a minimum price of $200,000 per seat) who are set to make trips into orbit an everyday occurrence for those with deep pockets.

And space-inspired fashion is already making cosmic waves in the design world.

Earlier this year a space fashion show was held in Yokohama, Japan and featured at the Japan Aerospace 2008 exhibition.

Last year Louis Vuitton held an exhibition at the Espace Louis Vuitton in Paris titled "The Temptation of Space" which included an installation by legendary French designer Philippe Starck.

That show followed two international space fashion shows in Japan and the U.S.

David Jankowski, president and founder of DestinySpace, one of the organizations actively involved in the world of apparel for the final frontier, said space fashion is more than just a fad.

"Space fashion is important and will be in the next generation of space suits. I don't know how much we will see at the beginning because simpler versions of space attire are going to be what people are interested in," he said. "But there will be some sense of fashion involved. I would like something futuristic if I was going up into space."

Jankowski said the organizer of the space fashion shows, Misuzu Onuki, had gone to great lengths to prepare the shows, and they had attracted massive amounts of interest.

Forecasting that space travelers would soon become fashion-conscious, Jankowski likened the situation to the beginnings of commercial air travel.

"Women had certain dresses and jackets to wear just for flying in the airplane. Back then it was this brand new experience and you had to dress for it."

And there is no doubt space fashion is being taken seriously.

DestinySpace and a similar company called Rocketplane are looking at forming a space fashion organization with other partners, while the Massachusetts Institute of Technology (MIT) is looking at a new slim-fit space suit. NASA also is looking to design a new "Constellation" suit especially for space travelers.

Jankowski said the space fashion shows were important for a variety of reasons.

"The event got people to start thinking about space tourism. The whole reason behind the show was to get people thinking about it and make it something that everyone can participate in."

While space travel may be inaccessible to many, a fashion show is something the average person can participate in, he said.

The shows had produced a variety of results, Jankowski said.

"Some of those I can see being worn in space, but others just weren't practical. Some of the bigger gowns were 'space-inspired fashion,' but people need to be comfortable and free in space, so I'm not sure they would work."

So where will the line between fashion and practicality fall?

"I think we will see a move towards thinking about the fashion side of things, but at the same time people still want something that works," he said. "At the end of the day it's survival equipment, so how can you make that look good? You just do the best you can."

A company related to Orbital Outfitters, Global Effects, has made space suits for many major space-related movies, including "Apollo 13" and "Armageddon." "If you name the space film, we have probably made the suits for it," Feige said, reeling off a list.

He felt the focus of space fashion will become more concentrated on real space hardware, rather than just space-inspired fashion.

In terms of design changes, Feige said a move towards a slimmer suit was inevitable. "What we have started doing is making them less baggy when they're not in use."

However, with standard suits designed using "mechanical counter-pressure," where the wearer was literally in a bag full of gas, Feige was still unsure about how the MIT technology would develop.

"MIT's suit uses the material to push on you. That works well for the arms and legs, but wherever you have non-uniform parts of the body, it's not so good," he said.

He said there were some production issues facing all space suit-making projects. "The technology is not so hard, it's how to make lots of them and how to make them more cheaply."