Will the art bubble burst?

LONDON, England (CNN) -- Events in London's art world last weekend sent out contrasting signals as to the future of the global art market. 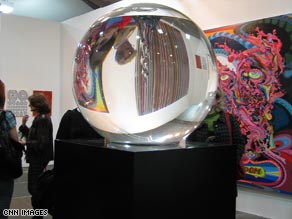 Will the bubble burst? "Perpetual Void" by artist Petroc Sesti, fit the current mood of uncertainty.

Mid-season contemporary art auctions at London's Sotheby's, Christies and Phillips confirmed fears that the art market might be the next victim of the financial crisis.

While sales figures were still significant, they brought in considerably less than the presale estimates that had been put together when the future of global finance looked less bleak.

The auctions showed that a readjustment of prices might be necessary in an art world that just a month ago saw artist Damien Hirst making £111 million for 218 of his works.

Sarah Thornton, who has written a book "Seven Days in the Art World," explained that those art buyers who have now dropped out of the market are the speculators.

"Those who continue to buy art are the real art lovers; they are not willing to relinquish that passion," Thornton told CNN.

"I have just heard of someone who fired their chauffeur to continue funding an expensive art-buying habit," she added.

Some artists are also going to extreme lengths to continue their trade.

The artists and gallery owner Daniella Luna ate remnants of visitors' food and slept only when a visitor was kind enough to offer them a roof.

But the fair showed that the larger public's interest in contemporary art remains robust. Frieze brought in thousands of visitors from around the globe and most gallery owners seemed content with sales.

Roger Tatley from the Hauser & Wirth gallery, based in Zurich and London, told CNN: "We were a little anxious, but this fair turned out to be the best we've had." Houser and Wirth sold almost all its works in the booth including a Henry Moore piece for $2.7 million. Are you still buying art?

Whilst Moore's art represents the higher end of prices at Frieze; most works at the fair are cheaper than at auction houses, therefore reflecting a wider art-buying audience.

Rudolphe von Hofmannsthal, Director of Dicksmith gallery, a hip and relatively new gallery representing young artists fresh from their Masters degrees, said that while there was less of a rush to buy the gallery's works-- priced at around $6000 to $40,000-- this year, he remained confident about investment in art.

"I believe art is still an absolute necessity," von Hofmannsthal said, adding; "this economic crisis might kill the mad hype in the art world, but there is still interest in new ideas and new works."

Blair Taylor, who works for Los Angeles and Berlin gallery Peres Project, agreed that while people might be slower to rush into buying unknown art, the outcome for the art world is not necessarily a bad one.

"I notice there is more of a conversation going on now before a collector decides to buy something" Blair said. "This climate might allow artists to focus more on what they are making. If it's not anymore about quantity, the focus will come back to the art object."

Angry with his financial situation, one of the artists at Appetite gallery, Diego de Aduriz, caused a frenzy when he ran around the fair naked. "We have to learn how to survive these difficult times" says Daniella Luna.

Her words ring especially true as Appetite did not sell any of its works-- it seems the art public might not be ready to hear the words "survival" just yet.