MOSCOW, Russia (CNN) -- The mayor of the capital of Russia's North Ossetia region was killed Wednesday when his car came under gunfire, officials said. 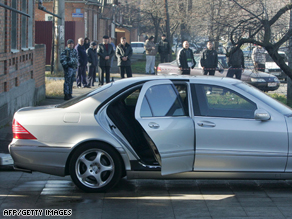 Vitaly Karayev, the mayor of Vladikavkaz, was seriously hurt when his car was fired upon Wednesday morning, and he later died from gunshot wounds, the North Ossetian internal ministry told CNN.

Authorities do not have a motive for the attack, North Ossetian President Taimuraz Mamsurov said.

"I don't even have any theories concerning the incident," the president told the Interfax news agency. "The man had just started working in this office."

North Ossetia and the rest of the Caucasus region have been plagued with violence and political instability over the years.

Earlier this month, a suicide bomber targeted a minibus unloading passengers at a market in Vladikavkaz, killing at least 12 people and wounding more than 40 others.

Last month, the deputy mayor of Vladikavkaz was injured when a bomb exploded in his car.

All About Caucasus • Chechnya • Russia • Republic of Georgia