LONDON, England (CNN) -- A British surgeon amputated the arm of a wounded teenager in Congo, Africa, with help from instructions sent to him by text message. 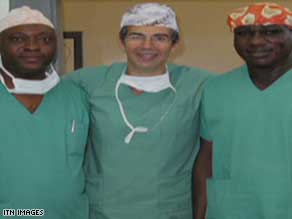 British surgeon David Nott, center, with two colleagues in a Congo field hospital where he carried out the operation.

David Nott texted his surgical colleague Meirion Thomas, who is one of only a handful of UK surgeons familiar with the difficult procedure of removing the collar bone and shoulder blade.

David Nott realized that teenager J, whose arms had been ripped off and who was now gangrenous, had only a few days to live.

"I knew that the only way to save this boy's life was to do a forequarter amputation, and I knew that Professor Meirion Thomas was really the expert," Nott said.

Nott, a vascular surgeon at the Royal Marsden Hospital in London, who volunteers one month a year with humanitarian organization Doctors Without Borders, had never performed such an operation.

Watch an interview with Nott »

Thomas replied almost immediately with 10 steps Nott should follow to carry out the procedure and then signed off with "Easy! Good luck."

David Nott followed his colleague's instructions step by step: "I felt I had like my guardian angel on my left shoulder showing me what to do. I just got on with it, and everything he told me, I just did".

Nott and his team embarked on the three-hour operation with just one pint of donated blood.

Teenager J is said to have made a full recovery while Nott stayed to keep an eye on his wounds.

Thomas said, "All I did was tell David the 10 steps, and I knew that he would follow them."