Queen Rania most inspirational leader of 2008

LONDON, England (CNN) -- She is one of the world's most likeable and photogenic leaders, has her own YouTube channel, and is determined to change the face of learning in the Middle East. 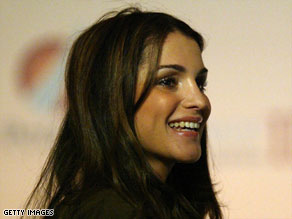 Queen Rania's down-to-earth personality has won hearts and minds all over the world.

She is also, according to you, the most inspirational leader featured on CNN's "The Spirit of..." in 2008.

Thousands of CNN Web site users voted to award her the honor for her matchless energy working with Jordan's young people, ahead of luminaries such as peace advocate Kofi Annan, activist Wangari Maathai and environmentalist James Lovelock.

This is Queen Rania's second award in as many months. In November, she was presented with the first ever YouTube Visionary Award for her bold use of the video-sharing network to discuss stereotypes about Islam and the Arab world. The channel fielded questions from young people about all aspects of Islamic culture.

She could not be present to personally receive the honour at YouTube's Live event in San Francisco, but her pop-culture-savvy pre-recorded acceptance speech showed her to be possibly the coolest queen alive.

She delighted viewers with a lighthearted top-ten list of reasons for registering her own YouTube channel, which included, "Because I didn't have enough friends on Facebook," and "Because anything Queen Elizabeth can do I can do better."

The experimental venture gained her a faithful online following, and since then the channel has become a platform for entertaining, non-hostile debate.

It is exactly this willingness to set aside her royal image and interact with the public that her fans say has shown Queen Rania's dedication to bringing about change.

She first entered the international spotlight 15 years ago after marrying Abdullah II bin al-Hussein, the then future king of Jordan. In 1999, she was proclaimed Queen, the world's youngest at age 28.

She wasted little time in applying herself to various causes, and soon made her name as an engaging advocate for women's rights and moderate Islam, and as a heavy investor in youth.

The 38-year-old mother of four has said that she cares about her people as if they were her own children, and wants to ensure as many of them as possible get the most out of school.

Queen Rania may be light-hearted in some of her approaches, but she is very serious when it comes to revitalizing education in the Middle East.

She has made closing the Middle East's "knowledge divide" -- the gap in knowledge that has grown as a result of people in richer countries having more access to computers, the Internet and education than those in poorer countries -- a top priority over the next few years in the hope that it will unlock the economic potential of the region's population.

Queen Rania certainly has a challenge on her hands. Earlier this year, the Arab League Educational Cultural and Scientific Organisation revealed that nearly one in three between the ages of 15 and 45 is illiterate.

Alongside promoting equal rights for men and women and the importance of literacy, Queen Rania has strived to convince both the education and private sectors that existing education systems need reinvigoration. She has repeatedly called for creative instruction and explorative learning to be embraced in the classroom.

In April of this year, Queen Rania launched the Madrasati ("My School") project, which encourages Jordanians to get their neediest schools back on their feet.

Under the program, communities are working with the public and private sectors to raise funds and recruit volunteers to renovate school facilities and provide school supplies and equipment. This is expected to improve the learning environment for children, and ultimately have a ripple effect on the neighborhoods where the schools are located.

Queen Rania's campaigns in various areas have helped to inspire other Middle Eastern policy-makers to see globalization in a more positive light -- a truly inspiring leader.