(CNN) -- Belgium's Prime Minister Yves Leterme has offered his government's resignation amid a row over the break-up of the stricken Fortis bank, according to national media reports. 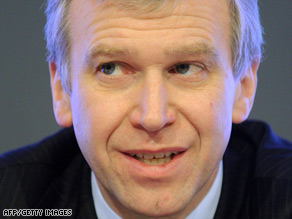 Belgium's Prime Minister Yves Leterme has offered his government's resignation, according to reports.

Belgian newspapers and state television reported that Leterme was tendering the government's resignation to the king.

King Albert II will decide whether to refuse or accept the resignation.

Earlier, Justice Minister Jo Vandeurzen quit after Belgium's highest court suggested the government had tried to influence a ruling on the Fortis case.

Judges last week effectively blocked the government's bailout and sale of its stake in Fortis to French bank BNP Paribas.

The court found in favor of 2,200 shareholders who wanted more say in the bank's future.

Fortis was among the banks worst-hit by the credit crunch, leaving it short of cash and needing help from the governments of Belgium, the Netherlands and Luxembourg.

They agreed to provide $15.5B to Fortis in a move to reassure savers and clients about the financial health of the cross-border bank.

Each government took a 49% stake in the bank in their respective countries, with Belgium then lining up BNP to buy its stake.

Leterme tried to tender his resignation for different reasons in July, after failing to form a coalition government and mend political infighting that threatened to splinter the country, but the king refused.

Belgium has been mired in political instability since 2007 elections that left no clear winner and highlighted growing political strife between the Flemish north and French-speaking south.