JERUSALEM (CNN) -- An Israeli Cabinet member said the Jewish state "will attack" Iran if it doesn't halt its efforts to develop nuclear weaponry, according to a newspaper report Friday. 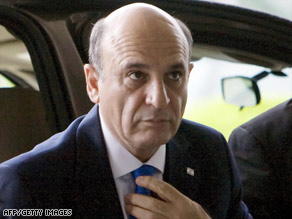 Shaul Mofaz is Israel's main liaison with the United States on strategic issues.

"If Iran continues its program to develop nuclear weapons, we will attack it," Deputy Prime Minister Shaul Mofaz told Yediot Ahronot, Israel's largest mass-circulation daily. "The window of opportunity has closed. The sanctions are not effective. There will be no alternative but to attack Iran in order to stop the Iranian nuclear program."

Mofaz's threat is one of the most explicit made against the Islamic Republic of Iran by a member of Prime Minister Ehud Olmert's Cabinet.

The threat is not without precedent. In 1981, Israeli warplanes destroyed an Iraqi nuclear reactor being built by Saddam Hussein's regime. Israel also is reported to have targeted a Syrian reactor in September.

It also has significant political resonance in Israel amid talk that Mofaz has begun jockeying to replace Olmert, who is embroiled in a corruption probe, as the ruling Kadima Party's leader and prime minister.

At least one Cabinet member, Defense Minister Ehud Barak, has called for Olmert to step down.

Mofaz, Israel's transport and road safety minister, is the main Israeli liaison with the United States on strategic issues, and his views on security have great import. He was born in Iran in 1948 and is a former defense minister, former armed forces chief and a member of Israel's Security Cabinet.

Mofaz was reiterating a prevailing view among Kadima officials and other Israeli politicians that international sanctions targeting Iran and its nuclear program aren't working. The West believes Iran's aim is to build nuclear weapons, while Iran says it is developing nuclear energy for peaceful purposes.

Asked how he responds to the harsh statements of Iranian President Mahmoud Ahmadinejad in Rome that Israel should be wiped off the map, Mofaz said: "He will disappear before Israel does."

Yediot Ahronot on Friday published excerpts of an interview with Mofaz that is to appear in the paper's Sunday holiday edition. The Jewish holiday of Shavuot is ushered in that evening.

Mofaz's remarks come a couple of days after Olmert said at a pro-Israeli conference in the United States that the "Iranian threat must be stopped by all possible means."

"Israel and the United States have long understood the acute danger embodied in a nuclear Iran, and are working closely in a concerted, coordinated effort to prevent Iran from becoming nuclear. Israel will not tolerate the possibility of a nuclear Iran, and neither should any other country in the free world," Olmert said to the American Israel Public Affairs Committee convention.

In April, Israeli Infrastructure Minister Benjamin Ben-Eliezer said that "an Iranian attack will lead to a harsh retaliation by Israel, which will lead to the destruction of the Iranian nation."

All About Iran • Cabinet of Israel • Ehud Olmert