BAGHDAD, Iraq (CNN) -- Three prominent tribal leaders, including the head of Saddam Hussein's Sunni tribe and two others who had been working for national reconciliation, were killed over the past 24 hours in northern Iraq. 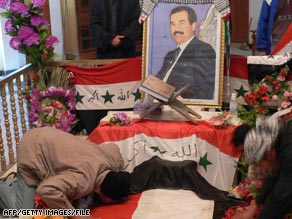 A bomb on Tuesday killed Sheikh Ali al-Nida, head of the al-Bou Nasir tribe, which includes Hussein's family, according to an official from Salaheddin province.

The sheikh was traveling from Ouja, Hussein's hometown, toward Tikrit when an explosive attached to his sport utility vehicle detonated. He and his driver were killed, and two bodyguards were critically wounded.

Al-Nida was leader in Ouja of the Awakening Council, an American-backed group of former insurgents or their supporters.

In December 2006, al-Nida flew to Baghdad and picked up Hussein's body for burial in Ouja after the former dictator's execution.

Killed were Sheikh Abdul Nour Mohammed al-Tahhan of the Obeid tribe and Sheikh Mohammed Khalil Hamash of the Halabid tribe. They were headed to Tal Afar after attending a meeting in Mosul.

Both are Sunni Arabs. They were working to bring together Shiites and Sunnis Turkmen in Tal Afar, which has a large Turkmen population.

A Tal Afar official said both sheikhs played big roles in reconciliation there. Mosul and Tal Afar are large cities in Nineveh province, where American and Iraqi troops have been fighting al Qaeda in Iraq.

The deaths occurred about 30 miles (48 kilometers) southwest of Kirkuk during an operation targeting an insurgent "with a long history" of terrorist activities around Kirkuk, the military said.

Five people were detained in the operation, and troops destroyed explosives and grenades found at the scene.

Coalition troops have been battling Sunni Arab insurgents in much of northern Iraq, including Tameem province -- which includes oil-rich Kirkuk, where Kurds, Sunni Arabs and Turkmens have been jockeying for political power.

Meanwhile, a top American diplomat, explaining talks with Iraq on a bilateral relationship, said Tuesday the United States believes Iraq should not be used as a "platform" for strikes on other states.

David Satterfield, a senior adviser on Iraq at the State Department, said respect for Iraqi sovereignty is an underpinning of the talks, which he believes can be completed by the end of July.