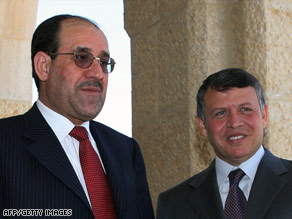 Iraqi Foreign Minister Hoshyar Zebari said the trip -- along with others planned or made to Iraq by high-level delegations and leaders -- reflects a greater confidence in Iraq among the international community.

Zebari, speaking at a press conference, didn't give a date for Abdullah's visit.

Jordan, which borders Iraq to the west, and the United Arab Emirates are among the Arab countries that have named ambassadors to Iraq, Zebari said.

The announcement comes as Iraq's Shiite- and Kurdish-dominated government pushes to widen relations with Sunni Arabs, both inside and outside the country.

The largest Sunni Arab political bloc in Iraq is on the verge of rejoining the Cabinet after a nearly yearlong boycott.

Leaders from the United States and Britain have visited Iraq, as has Mahmoud Ahmadinejad, the president of Iran -- the Shiite country on Iraq's eastern border.

He said that Iraqi Prime Minister Nuri al-Maliki is planning visits to Germany, Italy, and the United Arab Emirates.

Zebari calls such developments encouraging and said they reflect a profound "political opening."