Behind the Scenes: Shootings are painful reminder

In our Behind the Scenes series, CNN correspondents share their experiences in covering news and analyze the stories behind the events. 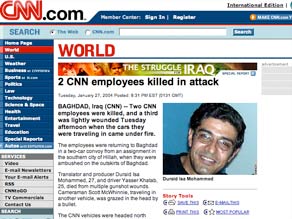 Michael Holmes vividly remembers the 2004 attack that killed two of his colleagues in Iraq.

(CNN) -- There has been some disturbing video out of Georgia the past few days, some of which brought back pretty awful memories for me personally.

Journalists are being shot at, and not by accident.

Let's be clear: There's no comparing what the media's been going through to what Georgian civilians have endured since the conflict with Russia began. For a start, we choose to be there. But the apparent targeting of people who are clearly journalists is always galling.

First, there was video of a reporter for Georgian public television getting shot in the forearm while preparing to go live. She was pretty lucky, actually; I heard at least four shots on the video, and her reaction time after getting hit wasn't great. Also, she wasn't wearing a flak jacket (no, it wouldn't have helped her forearm, but if one of those other three shots had been slightly more accurate, it may have saved her life).

She donned the body armor only after the incident was over, and none of her crew appeared to be wearing protection. Not smart.

Granted, not every media outlet can afford top-level protection, but I can't imagine a CNN crew being in that position without flak jackets on and without a security presence of our own.

The one positive was I could see her wound being treated with a pressure bandage, so at least the crew was carrying some medical equipment.

The other incident was far more dramatic and potentially deadly. Turkish journalists came under sustained fire as they drive near Tshinvali. Multiple rounds struck the windshield and sunroof. One of the journalists was shot in the eye but survived. The others -- incredibly -- were unharmed. How more weren't hurt or killed seems amazing when you watch the video.

Watch the journalists come under fire »

Having traveled in some dodgy places over the years (Rwanda in '94, Afghanistan in '02, Northern Ireland, the West Bank and Gaza multiple times and nine trips to Iraq), I can empathize with those men.

In fact, I admit to a physical reaction to that video: a pang in my guts. The sounds, the sight of glass breaking and holes "appearing" in the windshield, the yelling, the almost tangible fear you could sense inside that vehicle. I've no doubt they thought they were going to die.

No doubt it's because I've been where they were. Back in the earlier stages of the Iraq war, the media could still be "unilateral" -- that is, travel independently of the military.

On January 27, 2004, our two-car convoy was returning to Baghdad from an assignment in Hillah, in the south of the country. I was in the front vehicle, right rear seat, talking to my cameraman Scotty McWhinnie seated next to me, when we heard a thud and a whistle and saw a hole appear in the windshield.

A bullet had just traveled through the rear, between our heads, and out the front of the car. Our two vehicles were under attack, at high speed, by two other vehicles.

We both swung our heads around and saw several things at once. First, our second vehicle, containing driver and friend Yasser Khatab and my translator Duraid Issa Mohammad, swerving off the road, the windshield red with their blood. They'd been hit by the second attack vehicle. As we later learned, they were already dead.

In that same few seconds, we saw the man who wanted us dead, too. He was standing through the sunroof of another vehicle, firing an AK-47 with armor-piercing rounds. Bang. Bang. Bang. Glass smashing, yells, our security man screaming for us to "get down" in far more colorful language than I can say here.

Laying across the seat, trying to be "small," pulling Scotty down on my lap, realizing he'd been shot in the head and bleeding profusely. Watching our security man half out the window, firing back. The noise. I'll never forget the noise level. I've been in numerous firefights, heard plenty of bombs and bangs. This was different. We weren't "caught in the middle" of something. These guys wanted us dead. It was personal.

Until a situation like that, you accept the risks of war reporting. You feel you're doing a worthwhile job, and I still feel that way. But at that precise moment, I remember thinking, "What the HELL am I doing here?" And then laying there, listening to the cacophony, watching our security guy still firing, wondering what it would feel like when a bullet eventually hit my body.

It lasted perhaps 30 seconds, maybe a little more. It felt like two hours.

Don't ever debate with me the "ethics" of journalists having armed guards in war zones. I have some pretty strong views on it.

CNN has always taken seriously security and, equally important, medical training for its staff. Ours kicked in in the moments after the shooting stopped. I had immediate access to a fully stocked medical kit. After examining Scotty and confirming that the bullet hadn't entered his skull, and with the help of producer Shirley Hung, I applied a pressure bandage to stem the bleeding as we raced to a U.S. military base for more treatment.

Our security man was still on high alert. He couldn't help, so we had to do it ourselves.

Before leaving for a conflict region, all CNN staff members go through pretty rigorous training and are equipped with personal medical packs, body armor, helmets, etc. In addition, our security personnel are trained medics and carry full backpack of medical equipment.

If the unthinkable happens, we stand a chance.

My thoughts are with those Turkish colleagues today. I know how they feel. And I still think of Duraid and Yasser. Every single day.

All About War and Conflict • Media