BAGHDAD, Iraq (CNN) -- Kuwait's prime minister will be making a trip to Iraq soon, to discuss bilateral ties and debt issues among other things. 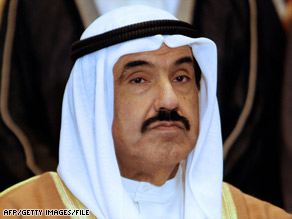 Al-Sabah's trip would be the latest high-level visit to Iraq by a top Arab official, and it comes as Iraq works to cement ties with its immediate neighbors and the Arab world in general.

Some Arab countries have agreed to reopen their embassies in Baghdad. King Abdullah II of Jordan last month became the first Arab head of state to visit Iraq since the 2003 U.S.-led invasion.

The Iraqi government said Finance Minister Bayan Jabr arrived Sunday in Kuwait heading a delegation to discuss bilateral ties, including the war reparations Iraq is paying Kuwait for its 1990 invasion of the Arab state.

KUNA said al-Sabah accepted the invitation and said the date of the visit will be set through diplomatic channels.

An aide to al-Maliki told CNN he had heard that the visit was scheduled for next week but wasn't aware of reports that it had been postponed till after the holy month of Ramadan ends in about three weeks.

Iraq has been asking Gulf states to waive debts from the Saddam Hussein era. Recently, the United Arab Emirates canceled about $7 billion owed by Iraq.

Iraq wants to lower the amount of money it has to pay into a U.N. compensation fund for people who suffered losses from Iraq's invasion of Kuwait.

The bomb detonated in a parked car in central Baiji -- about 125 miles (200 km) north of Baghdad -- and was believed to be targeting a police patrol, the ministry said. Among the five wounded were two other policemen.

It was one of several attacks across Baghdad on Monday, the Interior Ministry said. In all, eight people were killed and more than three dozen wounded in the attacks.

Earlier in the day, a civilian was shot dead in central Baghdad when security personnel in an Iraqi government convoy opened fire after hearing shots, Iraq's Interior Ministry said. Six civilians were wounded.

Another roadside bomb killed one police officer and wounded another officer and a civilian in central Baghdad, it said.

Gunmen wounded at least three government employees and their driver in eastern Baghdad, the ministry said.

In the northern Iraqi city of Mosul, a policeman was killed and four civilians were wounded in a car bombing.

In Diyala province, two Iraqi soldiers were killed and four were wounded when a roadside bomb struck their convoy south of Baquba, and attackers kidnapped an Awakening Council leader near Muqdadiya.

All About Iraq • Kuwait • Saddam Hussein