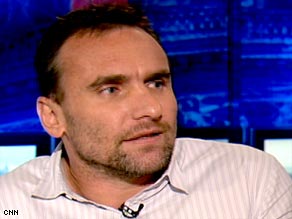 CNN's Michael Ware says, "The U.S. subcontracted out an assassination program against al Qaeda ... in early 2006."

Woodward, an associate editor of The Washington Post, says in "The War Within: A Secret White House History 2006-2008" that the assassination program, not the 2007 increase in U.S. forces in the war zone known as "the surge," is primarily responsible for the reduction of violence in Iraq.

Watch Larry King on his talk with Woodward »

John Roberts: What do you think of what Woodward is saying?

Michael Ware: Let's say that these "fusion teams," as they're being called, have come into effect. The first thing to say is, "Well, about time."

On the ground you've seen the lack of coordination as the left hand of one agency is not with the right hand of another agency within the American effort. But by and large, to suggest that anything like this being done now has been the major reason for the decline in violence is a bit rich.

I mean, the U.S. subcontracted out an assassination program against al Qaeda way back in early 2006. And this was conceded by the then-chief of military intelligence in Baghdad and by [U.S.] Ambassador Zalmay Khalilzad himself. That's what broke the back of al Qaeda.

Then when America put 100,000-plus insurgents on the U.S. government payroll, including members of al Qaeda, that not only took them out of the field, but it also let them run their own assassination programs against the Iranian-backed militias.

Roberts: So it sounds like assassination was a real part of the program here, but was that the only thing that worked? What about the addition of these troops and these neighborhood stations that were set up? Did it all kind of work together?

Ware: It does work together. But the key to the downturn in violence that we're seeing now is not so much the surge of 30,000 troops in itself.

What it's been is the segregation of Baghdad into these enclaves. It's been cutting a deal with Muqtada al-Sadr, the leader of the Iranian-backed militia. And primarily it's been putting your enemy on your payroll -- the Sunni insurgents and many members of al Qaeda. That's what's brought down the violence. This is your American militia, the counterbalance to the Iranian militias.

So if there's new teams out there with new technology, great. But they're riding the wave of previous success.

All About Al Qaeda in Iraq • Muqtada al-Sadr