BAGHDAD, Iraq (CNN) -- The U.S. military coalition in Iraq confirmed Tuesday that a business jet -- not a U.S. military aircraft -- was recently forced down in Iran due to an airspace violation. 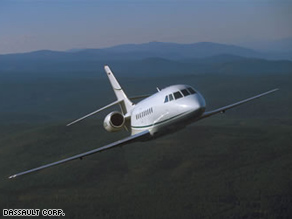 A Falcon business jet is shown in an undated file photo.

"The airplane is now being confirmed as a light transport plane with no Americans onboard," Multi-National Forces-Iraq said in a statement issued Tuesday. "From what we have been seeing, it was a Falcon business jet. We have accounted for all our aircraft and none are missing."

The U.S. coalition in Iraq had no information on who owned the aircraft, stressing that it was not a registered American plane.

Iran's semi-official Fars News Agency initially reported that five American military officials were on board the U.S. aircraft. But other Iranian media reports -- quoting Iranian officials -- said the aircraft was Hungarian and no Americans were on the plane.

Iranian officials told Iran's state-run Arabic language channel Al-Alam that the incident happened a week ago and that the plane was carrying humanitarian workers.

Fars later changed its Farsi language report, citing other Iranian and Arab media as saying the plane was not an American aircraft

Fars also initially reported that aircraft, which it called a "Falcon fighter," entered Iranian airspace at a low altitude from Turkey to avoid radar detection, despite repeated warnings by the Islamic Republic Air Force. It said the plane also carried three civilians.

Washington is monitoring the reports, but White House spokeswoman Dana Perino said "as far as we know (they are) totally bogus."

U.S. National Security Council Spokesman Gordon Johndroe also said there is no indication that the reports are accurate.

"We're looking into the various and conflicting reports coming from the Iranian 'news' agencies, but do not have any information at this time that would lead us to believe they are correct," he said.

Fars said the aircraft, which was en route to Afghanistan, was forced to land at an Iranian airport that it did not name. Fars reported that the eight people aboard were released "after daylong interrogations" that revealed the aircraft had "unintentionally" violated Iran's airspace.

Fars said the aircraft was later allowed to continue on to Afghanistan.

Two top U.S. military officials told CNN's Barbara Starr that no U.S. military aircraft has been forced down. The U.S. military has an F-16 Fighting Falcon, but it is a one-seat jet fighter aircraft that is used by the U.S. Air Force for air-to-air and air-to-ground combat.

The Dassault Falcon is a European-made private passenger business jet that resembles a Lear jet. It can seat a crew of two and as many as 10 passengers. It's used for passenger transport, but also has military uses.