DUBAI, United Arab Emirates (CNN) -- A huge man-made island shaped like a date palm tree opened Thursday off the coast of Dubai with a celebrity-studded gala and a three-day party. 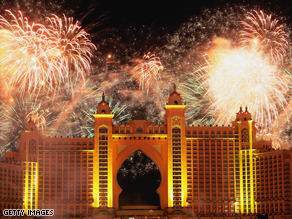 The island officially opens with a spectacular fireworks display.

The Palm Jumeirah increased Dubai's shoreline by 100 percent after work started on it in 2001.

Though the entire island officially opened Thursday, parts of it already opened weeks ago -- including the Atlantis, The Palm, a sister to the Atlantis resort in the Bahamas.

The Atlantis played host to the opening celebration Thursday night.

Stars including Oprah Winfrey, Michael Jordan, Robert De Niro, Janet Jackson and the Duchess of York were in attendance.

Bollywood star Priyanka Chopra started what was billed as the world's largest-ever fireworks display, with more than 100,000 pyrotechnic devices.

When work on the island began, a team of Dutch engineers were employed to create the Palm by using a technique called rainbowing -- a vessel dredging sand from the seabed and spraying and piling it onto the desired area and into the requested shape.