By Till Mayer for CNN

BAM, Iran (CNN) -- Till Mayer is a photographer working for the International Federation of Red Cross and Red Crescent Societies. In 2003 Mayer traveled to Bam, Iran, to chronicle the relief effort following an earthquake that killed at least 26,000 and devastated the historic city. This month, five years on, he returned to Bam to see how the city and its people have changed. 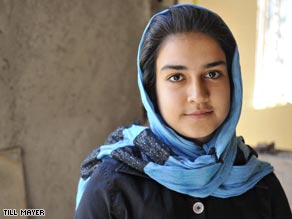 Earthquake survivor Zarah Tahemasebzadeh: "Life is beautiful for those who seek beauty."

Zarah Tahemasebzadeh sings the last stanza with a clear, high voice. Now the song is over but the children stay quiet. The only sound is a low hum from the engine of the bus taking them to their destination. A loose metal plate rattles as the bus bumps over the asphalt. Tac, tac, tac.

When Zarah looks up, there are tears in her eyes. Everyone knows what the 12-year-old is feeling. Sadness casts a pall over the group -- survivors of the earthquake in the Iranian city of Bam on December 26, 2003, which reduced their neighborhoods to rubble and killed at least 26,000 men, women and children.

Many long seconds later, the bus shudders to a halt. As the doors open with a soft hiss, more than 50 girls and boys spill outside, laughing and playing boisterously. They show off their disposable cameras; their assignment is to take photos of their city in ruins and jot down their thoughts.

That was four years ago. The outcome of the exercise was a book, one of the many psychosocial projects run by the Iranian Red Crescent after the 2003 earthquake.

There was even a puppet theatre -- yet Topolino the puppet had a hard time helping the children learn to laugh again; here, every person lost at least one loved one.

It has been more than four years since Zarah Tahemasebzadeh sang for her fellow bus passengers and five years since the earthquake. Her snapshot showed a door standing intact in the midst of a pile of rubble.

"If there's a door, then there must be people going in and out again -- so I needn't feel so alone," she wrote next to the photo. Many of her relatives were killed when their houses collapsed.

The 12-year-old girl of the bus trip is practically a young woman now. "She gets good marks," says her proud mother. Zarah wants to become a lawyer -- "because justice is so important," she says.

The Iranian government has given the family a small prefabricated house and a low-interest loan for rebuilding, and the shell of an imposing two-storey house now stands on their land. But money is tight.

The loan has been used up, and it will be difficult to finish the house with just her father's pension. Perhaps her father should have built a smaller house. But he wanted the new home to be just as beautiful as the old one -- as beautiful as before. That makes sense to Zarah. She often wishes that things could be like they were before -- for days or sometimes hours on end.

The 17-year-old girl knows that the earthquake broke her father's heart, and she can see how hard it is to get through to him when he is overcome by sadness.

There is a lot of building going on in Bam. Steel girders reach to the sky, and a massive stadium stands right in the heart of the city. Archaeologists are working to bring the Arg, the destroyed historical citadel, back to life, piece by piece.

The school Zarah attends is also a new building. There are new Red Crescent health centers and hospitals. The bazaar will soon be finished. Little by little, the city is coming back to normal, but the road to recovery is a difficult and stony path.

The sorrow over lost ones remains. Sometimes Zarah thinks of them, when she sees the ruins of a destroyed house or looks at old photographs. Then she tries to understand how, within 12 seconds, a whole world can change, when the earth moves.

Zarah has found her own way to deal with the pain. She has already compiled a whole volume of poems. "Life is beautiful for those who seek beauty," she says.

The Red Crescent center is some 800 meters from her family's house. On the first floor you can hear the hum of sewing machines. "The invisible wounds take the longest to heal," says Zinat Ebrahimi, who teaches a dressmaking class as part of the Red Crescent's psychosocial program.

All of the participants' lives took a tragic turn because of the earthquake. They have all lost husbands or children, or must cope with the loss of siblings or parents. "The dressmaking classes give them a feeling of security; they can put their new-found skills to practical use. Some of them can perhaps even open up a little shop," says Zinat Ebrahimi.

The Red Crescent's psychosocial program benefits nearly 1,000 people. The German Red Cross paid for the construction of a gym for the Red Crescent youth organization, where young people can play ball games or practice karate. Also on offer are computer classes, music workshops and Quran classes.

A young student in the dressmaking class embroiders a red rose on a white scarf with painstaking attention to detail. "Lovely," says Zinat Ebrahimi. Her student glances at the fabric with a smile, running a finger over the flower.

A couple of kilometers from there, many flowers will be laid on graves on that particular day. It is Thursday, and the people of Bam have come to the cemetery to remember their dead. In the background soar two enormous mounds of debris: more than 12 tons of rubble from ancient Bam are piled up here.

Ali Hafeziyan stands at his family's grave. For the inhabitants of Bam, the 48-year-old is a hero. He led Red Crescent operations after the earthquake. He lost 86 relatives, including his closest of kin. Yet he still found the strength to lead the operations, which is something the people will never forget. The sorrow in his face is heartbreaking.

Mohamed Babiker, the representative of the International Federation of Red Cross and Red Crescent Societies, lays flowers on the grave of the Hafeziyan family. This is Babiker's first time in Bam, but when he sees the mourners at the cemetery, he begins to understand just how brave Zarah Tahemasebzadeh must be to have learned how to seek beauty in life once again.