TEHRAN, Iran (CNN) -- A few dozen Iranians threw shoes at posters of U.S. President George W. Bush in Tehran Friday morning, a demonstration of support for an Iraqi journalist jailed for throwing his shoes at President Bush two weeks ago in Baghdad. 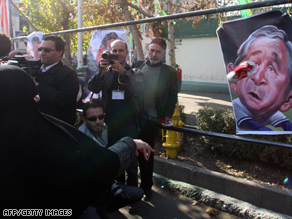 A woman throws a training shoe at a caricature poster of President George W. Bush in Tehran on December 26.

About 70 people stopped to toss their shoes as they walked to Friday prayer meetings on the main campus of Tehran University, according to a journalist on the scene.

Iraqi reporter Muntadhir Al-Zaidi faces trial next week for the December 14 incident in which he threw both of his shoes at Bush, who was standing next to Iraqi Prime Minister Nuri al-Maliki at a Green Zone news conference.

Several high-ranking Iranian clerics, members of parliament and other politicians have made statements in support of al-Zaidi, claiming he represented the true feelings of the Iraqi people towards President Bush.

"Since the Iraqi journalist acted bravely and on the basis of his Islamic faith, the Iranian people and media naturally support him," Javanfekr said.

Iran's Revolutionary Guards Corps called al-Zaidi "a brave journalist who, by throwing his shoe at the Great Satan, had committed a heroic act."