BAGHDAD, Iraq (CNN) -- The Iraqi Presidency Council approved a resolution Sunday that will allow non-U.S. foreign troops to remain in Iraq after a U.N. mandate expires at year's end. 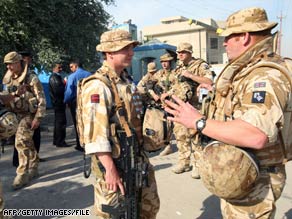 British troops talk in Basra last week. Iraq on Sunday OK'd foreign troops to remain in the country after the new year.

It was the last step for final adoption of the resolution, which won parliamentary approval Tuesday.

Iraq's main political parties hammered out the resolution a week ago, after an impasse among parliamentary factions threatened to continue beyond the December 31 deadline.

Britain has about 4,100 troops in Iraq, the second-largest contingent after the United States, which has about 142,500. Other countries covered under the resolution -- El Salvador, Australia, Romania and Estonia -- have a total of several hundred troops in the country.

The resolution authorizes Iraq to negotiate bilateral agreements with the countries, Kurdish lawmaker Mahmoud Othman said. If it had not been approved by year's end, their troops would have been in Iraq illegally.

In November, the United States concluded a separate agreement with the Iraqi government authorizing the continued presence of its troops. U.S. combat forces plan to pull back from population centers in Iraq by July and to withdraw from Iraq by the end of 2011.

The British government says its forces will complete their mission of training Iraqi troops by May 31 and withdraw from the country by July 31.

• Four people were killed and 20 wounded Sunday when a suicide bomber targeted a demonstration in Mosul against Israeli military operations in Gaza, a Mosul police official said. About 30 minutes into the rally, a suicide bomber wearing an explosive vest detonated after riding his bicycle into a crowd of protesters, police said.

• One of three al Qaeda in Iraq prisoners at large after a Friday jail break in Ramadi was killed in a gun battle with police Saturday, and the remaining two were arrested early Sunday, according to Ramadi police and an Iraqi Interior Ministry official.

Amad Ahmed Farhan was among 40 al Qaeda in Iraq prisoners who escaped from jail at al-Fursan police station. An Iraqi police patrol drove by Farhan's sister's home and Farhan began shooting at officers, a police official said. He then fled, jumping from the roof of one house to another before a police sniper gunned him down.

The remaining two prisoners, Abdul Aleem Abdulwahab and Lazem Mohammed Ali, were found hiding in water tanks Sunday at a home where they had threatened two women and several children with weapons, the Interior Ministry said.

Of the 40 who escaped, 24 were taken into custody, six were killed in the clashes and seven others were wounded. Ten Iraqi police also were killed.

• A car bomb killed at least two civilians and wounded four others Sunday near the western entrance to the city of Falluja, an Interior Ministry official said. Falluja is a Sunni town located about 35 miles (60 kilometers) west of Baghdad.

• A U.S. soldier was killed by a bomb Sunday in northern Baghdad, the U.S. military said. The soldier was with Multi-National Division - Baghdad. No further details were given. The death brings the U.S. toll in the Iraq war to 4,217.

CNN's Jill Dougherty and Mohammed Tawfeeq contributed to this report.

All About Ramadi • Iraq