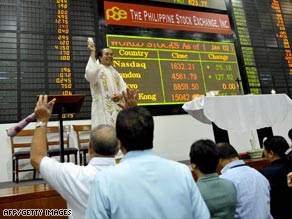 A priest officiates a mass at the Philippine Stock Exchange Monday.

Even with some losses on Wall Street Monday, "the market has a better tone to it," said Donald Selkin, chief market strategist at National Securities. He noted that while the major gauges are lower, the broader market is higher, with winners topping losers on the New York Stock Exchange. On the Nasdaq, winners and losers were roughly even.

Stocks had rallied Friday, with the Dow closing above 9,000 for the first time in two months, as investors pulled money out of bonds and put it to work in beaten-down equities.

Stocks are coming off a classic end-of-year "Santa Claus" rally. According to the Stock Trader's Almanac, a combination of the last five trading days of the previous year and the first two of the next have yielded an average return of 1.5 percent for the S&P 500 since 1950. The S&P is up 7.3 percent through Friday.

"On Friday, we had the best first-day-of-the-year rally since 2003, and that year was a comeback year after a terrible bear market," Selkin said. "We could see something similar this year, although I think any gains will be smaller."

Obama met Monday with leaders of both parties to start pushing for his economic stimulus plan. The plan will include $300 billion in tax cuts for businesses and individuals, and provisions for renewable-energy production and road and school construction.

Treasury prices tumbled, raising the corresponding yield on the benchmark 10-year note to 2.49 percent from 2.37 percent Friday. Treasury prices and yields move in opposite direction. Yields on the 2-year, 10-year and 30-year Treasuries all hit record lows last month.

U.S. light crude oil for February delivery rose $2.47 to settle at $48.81 a barrel on the New York Mercantile Exchange.