DAVOS, Switzerland (CNN) -- German Chancellor Angela Merkel warned Friday that U.S. efforts to prop up its failing auto industry with bailout money amount to a form of protectionism that threatened to distort the global economy. 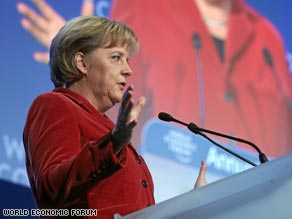 In a keynote speech on the third day of the World Economic Forum in Switzerland, Merkel said that open markets had to be protected and urged governments to work together to build a more robust and responsible global financial system.

Calling for an "open world economy," Merkel said: "We must not allow market forces to be completely distorted. For instance, I am very wary of seeing subsidies injected into the U.S. auto industry. That could lead to distortion and protectionism."

Merkel said the central task facing politicians was to restore the ability of markets to function and said the crisis required "exceptional measures."

She also said that Germany's "social market economy" could serve as a model for a future international financial system in which governments guarded both the "social and economic order" and proposed the creation of a U.N. economic council modeled on the Security Council.

"We want to have an eye firmly on the future so that we get out of this crisis stronger than when we went in," she told delegates. "We have to have a clear idea of where we are going to go so that we don't make the same mistakes as in the past."

Despite the scale of the crisis, Merkel said that "incredible opportunities" were opening up, adding that growing up in East Germany to become the chancellor of a unified German state had proved to her that nothing was impossible.

Earlier, British Prime Minister Gordon Brown urged global political and business leaders to work together to fix the financial system as the economic crisis returned to the top of the agenda in Davos.

Brown is due to host G-20 leaders in London in April and told reporters that he would use the economic summit to press for concerted international action and tougher global financial regulations.

"Politicians and business leaders have an urgent requirement to rise to the challenge of leadership," Brown said. "History is not destiny. We have a choice about what happens next. This is not only a time for analysis and retrospection but a time for action."

"This is a time not just for individual and national measures to deal with the global financial crisis. This is the time for the world to come together as one."

Brown, whose government has acted to prop up the UK's ailing banks with a rescue package of partial nationalization and this week announced a £2.3 billion ($3.3 billion) bailout for the country's auto manufacturers, urged countries to avoid retreating into protectionism, warning that restrictions on global trade would only worsen the economic crisis.

Also on Friday, Microsoft founder Bill Gates and wife Melinda Gates urged leaders not to allow the economic crisis to distract them from African development.

"Put simply, aid works," said Melinda, who now co-chairs the philanthropic Gates Foundation with her husband. "We must continue foreign aid assistance. It's difficult to keep this on the front pages right now but it's never been more important."

Meanwhile former U.S. vice-president and environmental campaigner Al Gore warned that a consensus on tackling climate change was needed between developed and developing nations before this year's talks in Copenhagen on a successor to the Kyoto Protocol.

"What is most important is that this year is not wasted. We are running out of time," Gore warned.